We are going to tell you about Open Radio, a free application that allows us to listen to radios from all over the world on our Android phone, (something that seems almost extinct) but also in Android Auto and Android TV, one of its strongest points, having full compatibility with Google operating systems.

It is a simple, easy-to-use app that has a 4.6-star rating, with more than 50,000 downloads. Only weighs 9.6 megs so it will not have an impact on the internal memory of your terminal. Let’s see how it works and why it can be a good option.

This is Open Radio 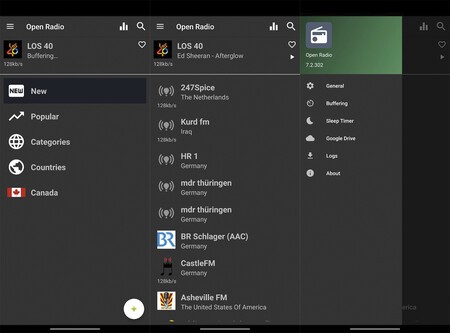 Open Radio is an open source project that aims to offer users listen to the different radios from all over the world, through the internet. When we open the application we have an immense list of stations, with a search engine to be able to filter the ones we want.

Open Radio is compatible with Android TV and Android Auto, so we can listen to the radio anywhere

However, the great strength of this application is that supports both Android TV and Android Auto. If we are in the car and we activate the Android Auto interface, Open Radio will appear as an app, allowing us to listen to practically any radio in the world in our car.

The same happens if we are at home with the TV on and we want to put it on as a radio. Open Radio is compatible with Android TV, so we can use the app on this system, being officially supported.

The app has no advertising, but If any online station has ads, this will not be under the control of said app, so we will listen to them. Open Radio is completely free and can be downloaded from the Play Store.