With the latest Google Chromecast, Google changed the rules of the game: instead of being a device to which you can send content, it had its own operating system and apps, like the traditional TV Boxes or TV Sticks, but with a twist of screenplay. It wasn’t Android TV, it was Google TV.

Google TV came as a new operating system for Smart TV, causing no little confusion since Android TV had already existed for many years. Currently, TVs are sold with both Android TV and Google TV, so the question is unavoidable: How is Android TV alike and how is it different from Google TV?

The same Android inside

Let’s start with the most important thing: no matter how much Google has decided to get dizzy and confuse us more than necessary, Google TV is Android TV with a coat of paint. In a way, it is the equivalent of a mobile personalization layer such as EMUI or Samsung One UI. It is the same, but modified. This time, modified by Google.

This is more than evident when consulting system information, where it is not hidden that, for example, Google TV shows the version of Android TV. It is the same operating system on which the interface and, incidentally, some functions have been changed.

Google TV (left) and Android TV (right) are the same on the inside: Android

That is, on a Smart TV with Google TV you can install the same applications as on a TV with Android TV and vice versa. In simple words, Google TV is Android TV customized by Google in the same way that the Android that is included in a Google Pixel mobile is not the same as what we would find in a mobile with Android One. 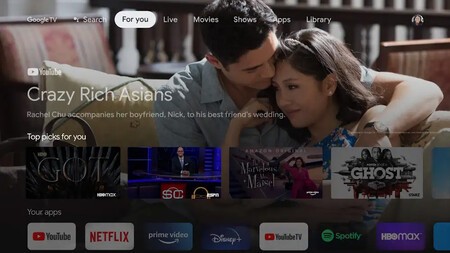 The Google TV interface focuses more on content than applications

While Android TV shows a column of applications and content from each of them, Google TV organizes the content in tabs like For you, Direct, Movies, Series. In practice, the idea is that you find something to do regardless of the platform on which it is served, although the system needs an integration between applications that is not available in all regions.

This home screen integra Google Play Store within the applications tab, while on Android TV it is still necessary to open the store manually. In addition, the current user profile is clearly visible. 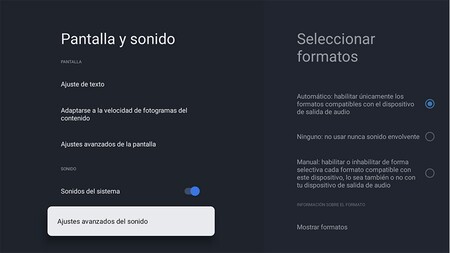 Google TV settings are displayed in two columns and often include a more in-depth explanation of what each option is.

Not only does it change the home screen on Google TV, but it the appearance of all menus is completely renewed, including TV settings. It’s not a radical change, but the design is somewhat more up-to-date, with a full-size, two-column display, rather than the Android TV overlay and one column.

As with Android layers, on Google TV some menus change places in the settings, although the most interesting change is that many options include additional explanations about what they are for. 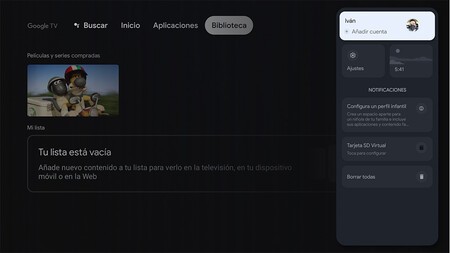 Google TV personalization is based on Google accounts, more important than Android TV

The name of Google TV is not accidental, it is an interface for Smart TV that depends a lot on the integration with the Google account. This is so there is a great weight in personalized recommendations, which are based on your profile. In Android TV you also need a Google account to take full advantage of it, although it is not so ubiquitous.

An interesting novelty is that you can add multiple accounts, so that each person has their own recommendations. User profiles are also pending to arrive on Android TV. Of course, you can also use Google TV in basic mode, the “dumb TV” mode. 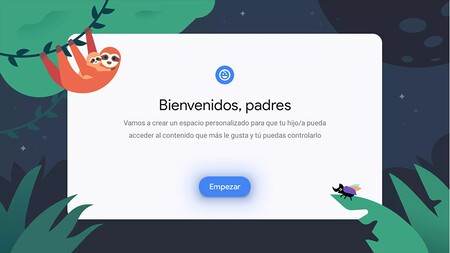 Speaking of user profiles, Google TV lets you set up a child account, which links to Google’s Family Link parental control app so you can allow or block certain apps.

In this way, parents can use the Family Link application on their mobile to see how long their children have been watching TV and put a limit maximum. When it’s time to sleep, the TV shows a warning.

The Assistant on Google TV includes suggestions, while on Android TV it simply listens

Android TV has easy access to the Google Assistant through a button both on the interface and on the remote, but apart from that it does not make it much easier to use: you press the button and the Assistant listens, without more.

On Google TV, the Assistant button becomes a screen with suggestions about what you can ask the Assistant, and you can also select one of them to launch the request without opening your mouth.

Google TV has an application 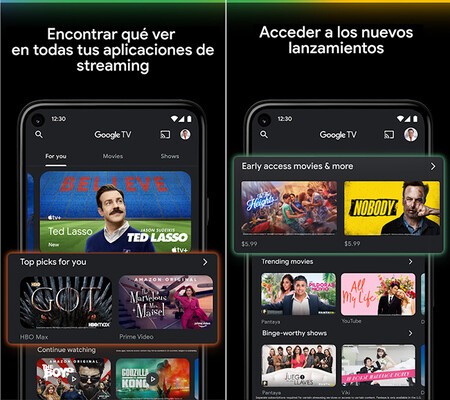 Finally, Google TV has an official mobile application – the old Google Play Movies – that serves as a kind of companion app. With her you can look for things to see on TV that are available in the different streaming services in which you are registered.

This, together with the possibility of add movies or series to “Watch later” From the Google search engine, you can carry out content discovery from your mobile at any time, without being in front of the TV. Some of these news are on their way to Android TV. 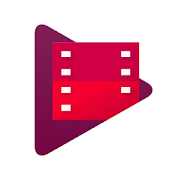 The same, but more modern 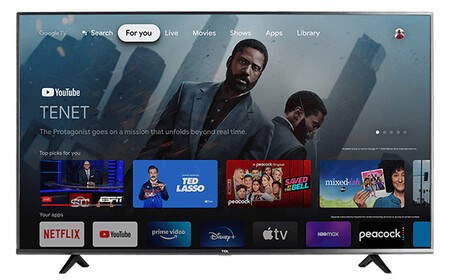 In short, it can be said that Google TV and Android TV are 90% the same, the remaining 10% being more than anything the appearance. Google TV looks more modern, although that content-centric rather than app-centric design may prove more annoying than a bonus for some users.

While Google bets everything on Google TV, Android TV hasn’t been shelved mostly because Google TV is still based on it, so its future seems to be guaranteed. In addition, some news from Google TV are pending to also reach Android TV.