Alexa has an application to bring the assistant to almost any Android, there is also a method to change the Google Assistant launcher for Alexa itself. Yes, until now it could not be activated by voice, a problem that the last update solves: the amazon wizard is easier to use.

Personal assistants on the phone are most useful when they can be activated by voice, well known to those who use Google Assistant, Samsung Bixby or Siri, to give three examples. What if, Alexa has its own Android application with which to ask questions or launch ‘skills’, but not being able to wake up the assistant saying ‘Alexa’ is an inconvenience. Amazon was aware of this and has almost solved it: the new ‘Hands-free’ mode arrives in the app so that the voice is the only thing it takes to invoke the assistant. With a drawback, yes.

Hands-free for Alexa, but only in your application 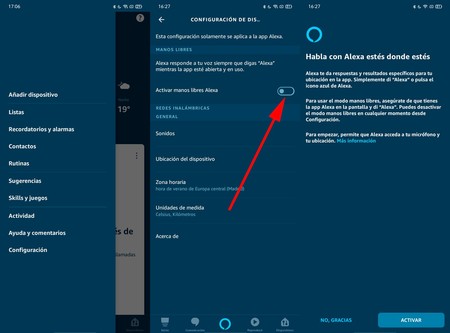 The latest update to the Alexa mobile app incorporates a new mode for invoking the wizard, the so-called ‘Hands free’. The option allows you to invoke Alexa in the same way it is used on smart speakers and displays: by voice. Always keeping in mind that the application must be open, at the moment there is no option to permanent listening with the screen off or if another app is being used.

The new ‘Hands-free’ mode brings the use of Alexa closer to the comfort that Google Assistant has on Android mobiles, although with the drawback that you have to open the app for the command detection to be activated. If this premise is fulfilled the experience is similar to that offered by Assistant. And you just have to follow the following steps to turn on the ‘Hands-free’:

The ‘Handsfree’ makes using Alexa on Android much more comfortable, even if you keep the obligation to open the app. It is a good alternative to the Google assistant, the one that comes standard on most Android. You can even combine both to manage your entire collection of connected devices, for example.

Alexa faces Google Assistant: can now be activated by voice in the app