The throne of streaming gaming platforms has a new contender: Facebook Gaming has opened its catalog to the first games available. Currently allows you to enjoy titles such as Asphalt 9: Legends or PGA TOUR Golf Shootout, all without the need to install anything since the software is executed in the Facebook cloud.

Instantaneous and installation-free games are not new on Facebook since the platform for the social network and Facebook Messenger had a large catalog of instant games. Although now the company decides to go further by offering running complex games in the cloud, like the celebrated Asphalt 9. In this way, you do not need a mobile that is too powerful to start it and the load runs without waiting, all by streaming. Even in a web browser.

Facebook Gaming is not new as the company’s gaming platform has been around for quite some time. Until now it offered videos of all kinds of video games, it also gave access to the instant gaming platform explicitly created for Facebook (sometimes mobile versions adapted, others with basic titles for the platform). The novelty is that from now on Facebook Gaming will offer high-performance and quality mobile games that they will not have to be installed from any store.

All Facebook Gaming streaming games can be run on any of the supported devices (currently Android and web, no iOS) keeping achievements, scores and also player ID. Facebook does not aspire to replace PC hardware, so, in principle at least, Facebook Gaming will be limited to mobile titles, not computer games (as they do Google Stadia The GeForce Now, for example). 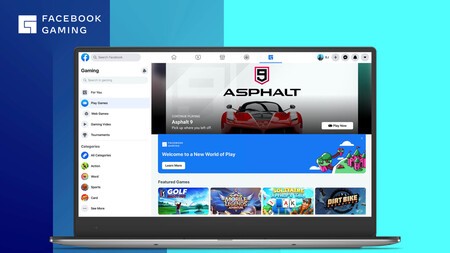 The initial beta is only available in the United States, Facebook Gaming does not allow you to play mobile titles in streaming beyond that country (it does offer access to Facebook games, as before). Further, the company has remodeled the Facebook ‘Gaming’ tab for the occasion giving it greater presence, especially to the new streaming games.