Android 11 has already been introduced. Although it seems that a short time ago, the truth is that the announcement occurred last February and since then we have had different betas at different stages of the testing of the new operating system. A process that continues today, already immersed in the month of June.

Google’s new operating system initially came in beta form for the company’s certified developers, and later, months later, the beta was released to all audiences, including manufacturers. It only remains to know when it will be released the definitive version of Android 11, the one that will blow up the wick of the world round of updates, and Google may have revealed it by mistake. 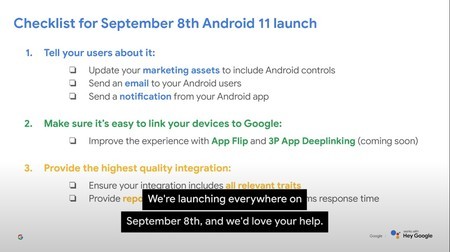 We cannot take this information as official, although the truth is that a Google executive has been in charge of releasing it to the media through a video corresponding to the Smart Home Summit of the Mountain View company. In this video, almost one hour and twenty-five minutes long, it shows a slide at 18 minutes with the arrival date of Android 11, and live information is also offered.

According to this Google executive, Android 11 should reach the general public on next September 8 And, we suppose, the Pixels should be the first to receive it. Although in previous years, remember, some model has taken the lead over Google’s own phones. But in the meantime, we are left with this possible arrival date: September 8.

For now, nothing is known about the release date of the next Google Pixel 5, nor about the Pixel 4a, but perhaps the first ones we can see that same day, September 8. What we have to do now is wait to see if the Mountain View company takes any steps to confirm this date, or if it will leave us with the intrigue of making it official until the last day.