One of the features that the Pixel 2 released in 2017, and that has accompanied the following Google phones, will not be available on this year’s Pixel.

The Pixel 4a, Pixel 4a 5G and Pixel 5 will not be compatible with AR stickers that the app Google camera offers through the section Playground. 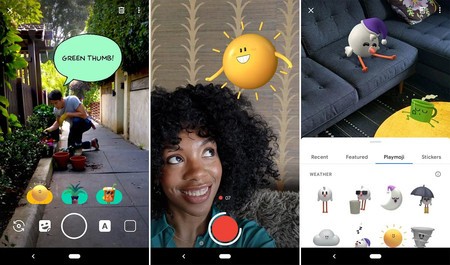 The Pixel 4a that Google sent to the press do not have the augmented reality stickers, and the company has confirmed that this absence is due to the camera of the new Pixel will not be compatible with Playground, the sections of stickers, Playmoji and the tool to add texts disappears. Even if you download Playground from the Play Store, nothing will happen. Pixel 4a onwards will not be able to use this feature.

In the statement, Google reaffirms its commitment to ARCore technology to offer the best augmented reality experiences on Android, but as we see, it will no longer be through the camera application.

We continue to bring ARCore and its latest features to the Pixel 4a and many other ARCore-compatible devices. Playground will continue to be backwards compatible with previous Pixel devices and we will focus our efforts on creating great AR experiences that serve a much wider audience.

The company also reports that Playground will continue to be available on the Pixel 4, Pixel 3a, Pixel 3, Pixel 2 and Pixel original. Furthermore, since last year, Playground is also available on some Motorola and LG models.

Now it seems that Google’s commitment to augmented reality will be through its search engine through 3D animals and other objects that reach more devices every week, and that also allows taking photos and recording videos.