Google Maps is available in countless languages, although its Android version behaves the same as any other application: it used the same language as the mobile. The latest version of Google Maps is somewhat more flexible, allowing you change the language in the application itself.

The change was sighted for the first time in October and was released in India, now starting to be activated to all users. It’s a faster way to change the language of Google Maps, equating the application to the functioning of the web version of Google Maps.

Google Maps in your language, without touching the mobile settings

On Android, apps try to use the same language the mobile is configured to, as long as they have their translation. For convenience, and to give more flexibility to users who want to use one application in one language and another in another, some applications allow you to change the language from their settings.

Google Maps was not one of them, although it is now. The latest version of Google Maps has incorporated a new menu in its settings by calling App language. Its purpose is the same as that deduced from its name: it allows you to choose between all the languages ​​that are supported in the application. By choosing one of them, Google Maps restarts in the new language. 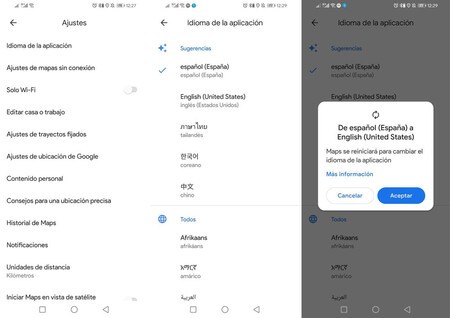 This function was available for many years in the web version of Google Maps, although the application was still synchronized with the mobile. With it, you can use Google Maps in your language even if it is not available in the mobile options, and without having to juggle apps, ADB, or root.

To use this new menu, you must touch on your profile photo, in the search bar, and enter the section of Settings. The language menu is at the top, which is a good idea, as you can find it if you mistakenly change the language to one you don’t understand.