You start to watch a series or a movie, or a documentary, and after a while you discover that it is not your style, it is not what you were looking for or, simply, you don’t want to keep seeing it and you switch to another. This gesture is the most common since video-on-demand platforms have existed, and it is still a replica of the change of channel on traditional television.

The gesture, however, would go more unnoticed if it were not that some platforms keep the title pending in a list that Netflix, in this particular case, calls “Keep watching”. A reminder that we have something to finish that becomes tedious when we have decided to abandon the product permanently. We are not going to continue seeing it but it continues and sometimes we can advance it to the end so that it disappears, but it does not always work. Now Netflix will allow us, at last, to eliminate it. 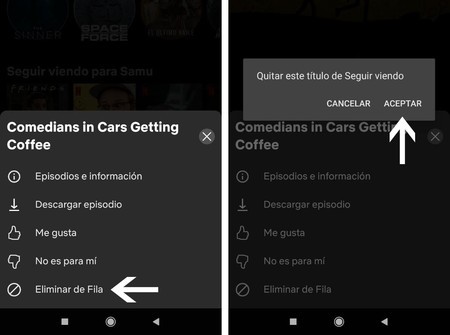 Netflix has finally decided to take the step that will allow us to forget about those series and movies that we no longer want to continue watching and that haunted us until the end of time. It has initially done so on Android, as the streaming service application has added an additional function to the dropdown that we have in each movie or series on the “Keep Watching” list.

By displaying these options we now find a “Delete from Row“not very brilliantly translated (comes from ‘Remove from Row” but it serves precisely that, to remove the series or movie from the “Keep watching” list. Pressing it, the application will consult us once again to make sure that is it exactly what we want to do, and if we confirm it with a “To accept” we will clean the listing.

For now, as we said, the functionality reaches the Netflix app for Android but next week it will also be available on the for iOS, and we trust that it will soon be expanded to the rest of the company’s apps, including apps for smart TVs, Smart TVs.