In this section we collect legendary Android mobiles, either because they are out of the conventional or because they are ahead of their time. Today we rediscover the Motorola Flipout from 2010, as small as some smartwatches today and featuring a rotating QWERTY keyboard.

Back in 2010, there was no shortage of QWERTY keyboard phones, with releases such as the Sony Ericsson Xperia X10 mini pro, although the Motorola Flipout stood out for the way the keyboard was displayed, turning around a corner similar to Microsoft’s Kin One which, by the way, was canceled.

We’re speaking of 2010, so to put us a little in situation, it is the year in which we met the first Samsung Galaxy S and the Google Nexus S. Both had a 4-inch screen, 1 GHz processor, 512 MB of RAM and a number of storage around 8 – 16 GB.

Compared, the technical specifications of the Motorola Flipout were a bit low, although obviously the main factor here is size. The Motorola Flipout was a 67 x 67 mm square, so it roughly occupied half of a conventional mobile phone, being instead a little thicker.

Considering its size and the presence of the keyboard, it managed to maintain an acceptable battery capacity of 1,130 mAh (removable, of course), although lacked front camera, something that was still relatively frequent at the time. 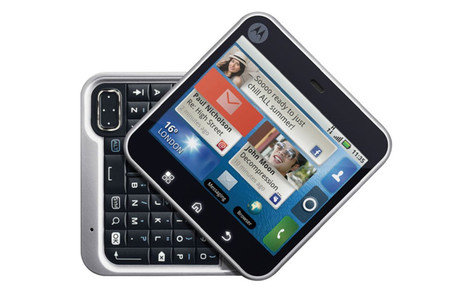 Today a mobile with a physical keyboard It is eccentric, but in 2010 it was not so much. The truth is that not as many mobile phones with a QWERTY keyboard arrived in Europe as those that remained in the American market, but the archive shows us 26 models launched in 2010, compared to … zero, launched during 2019.

It was small, square and had a rotating QWERTY keyboard

What was special was not so much the keyboard itself -complete, with five rows and a trackpad included- but the way it was deployed: rotating on an axis. This and, of course, the size and shape of the device, which became a square when the keyboard was folded.

With the keyboard unfolded the mobile was more reminiscent of a classic BlackBerry, at least from the front. The truth is that half of the mobile that contained the screen was somewhat thin, giving it a peculiar appearance when viewed from the side.

Another characteristic aspect was its small size. Motorola’s original press release called it “a phone as unique as you”, stressing that it fits comfortably in your pocket and the possibilities for customization through the use of different covers.

The truth is those 2.8 inches of screen are a bit lacking, but it had the advantage of being able to use the physical keyboard to chat, without the virtual keyboard occupying half the screen as it happens in traditional mobiles. 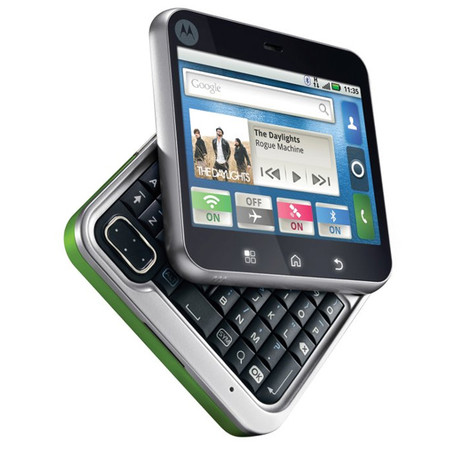 Motorola Flipout was rare in its day and even rarer today

The Motorola Flipout was a quite peculiar mobile and, although in its time there were some relatively similar models, several of them from Motorola itself such as the Motorola BackFlip, it is easy to say that today there is nothing similar.

The Motorola Flipout epitomizes the opposite of current trends

Basically the Motorola FlipOut is the opposite of current trends. On the one hand, mobile phones with QWERTY keyboards have long since become history. On the other hand, the trend is towards increasingly larger terminals, with screens that rarely go below 6 inches.

We don’t have therefore no recent Android mobile with physical keyboard or especially small. For reference, the smallest mobile released during 2019 is probably the Lava Z40, which even with its 4-inch screen is still twice as tall as the original Motorola Flipout. 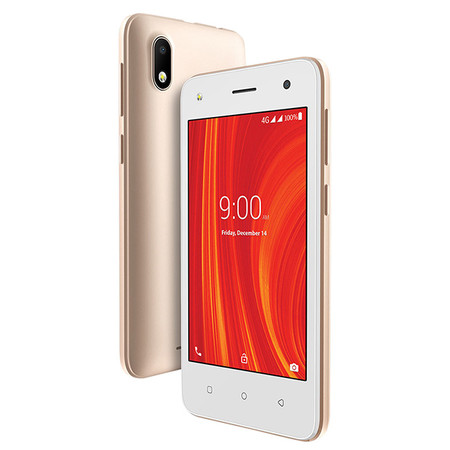 Lava Z40, the smallest mobile phone of 2019, is twice as big as the Motorola Flipout

Being less specific, the Motorola Flipout was an unconventional mobileAnd the truth is that we don’t have much of that today either. Niche mobiles have been entirely relegated to the gamer niche, and they are not excessively different from traditional mobiles, apart from some additional button, cooling or colored lights.

In recent times there has been some originality when it comes to raising the front camera, with inventions such as the shark fin of the OPPO Reno or the rotating cameras of the ASUS Zenfone 6 or the Samsung Galaxy A80. They are peculiar concepts, although putting them at the same level of madness that the Motorola Flipout it would be an exaggeration.