Realme welcomes the new year with new releases in China. We have already told you about the Realme GT2 Pro, the most complete of this new range, and now it is the turn of its little brother, the Realme GT2. Of course, I tell you that it is not small or modest. Let’s see everything that the new smartphone of the firm offers.

The fluidity of the flag in a very elegant design 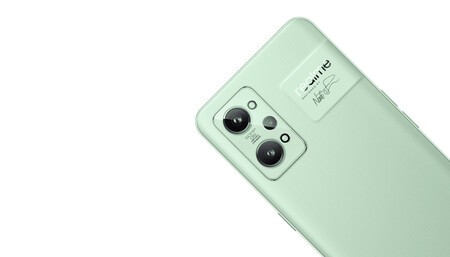 If we look at the external appearance of the Realme GT2, we see a smartphone with very elegant and clean lines, with a very clear front and the camera in a discreet hole aligned to the left. At the back we find a rectangular camera module and a kind of trim next to it where we find the signature of Naoto Fukasawa, industrial designer you have created these two models.

Returning to the front, it stars a 6.62-inch AMOLED screen and FullHD + resolution; here it moves away from its older brother that has a 2K screen, but does not give up on the refresh rate and also boasts adaptable 120Hz. In addition, it has a maximum brightness of 1,300 nits and a contrast of 5,000,000: 1. It will arrive in four colors: white, green, black and blue.

Regarding the cameras, the Realme GT2 has a set of three lenses, although the third in contention is a macro lens and it is not something that is going to be used very often. Those that will be used on a day-to-day basis are the main camera, with 50 megapixel Sony IMX766 sensor and the angular, also 50 megapixels but signed by Samsung. On the front we have a 16 megapixel selfie camera.

If we raise the hood, the Realme GT2 has nothing to envy of any high-end. It is true that it does not have the newest Qualcomm chip, but it has the Snapdragon 888 that has been the one that we have found in most of the top 2021 phones. In addition, it comes in versions of 8 or 12 GB of LPDDR5 and 128 or 256 RAM GB of UFS 3.1 memory. In the battery we have nothing less than 5,000 mAh with 65W fast charge.

Versions and prices of the Realme GT2

At the moment the new Realme smartphones have been advertised in China, where they are in pre-sale at the prices detailed below. We do not have confirmation about the arrival in Europe of this Realme GT2, but we hope to know more details soon.