The model takes most of the features of the Galaxy Tab A7 Lite but adds different aspects, aesthetics and software, to adapt your device for the little ones. Like the protective shell with a rear ring that facilitates both grip and support, or as the educational software that comes pre-installed with Android 11.

This is how Samsung makes money: the secret is on the IPHONE

Datasheet of the Samsung Galaxy Tab A7 Kids Edition

A Galaxy Tab A7 Lite for children, also in the name

The new tablet for the smallest of the house initially sets foot in Russia and does so with a 8.7-inch diagonal TFT LCD and WXGA + resolution, which translates to 1,340 x 800 pixels. The chosen processor is the Helio P22T with the PowerVR GE8320 GPU, which places the tablet in the most basic line of power and price, and offers a only version with 3GB of RAM and 32GB of internal space, expandable through a microSD.

In the cameras we have 8 rear megapixels and 2 megapixels, something quite basic, and as power we find an internal battery of 5,100 mAh with a 7.8W charge (charger included in the box). The tablet hits the market with Android 11 under One UI 3.1 and spiced up with all kinds of educational softwareIn addition to having an interface similar to the ‘Samsung Kids’ that personalizes the appearance of the tablet to make it more pleasant and intuitive for children.

In connectivity we have WiFi 5 and Bluetooth 5.0 as well as a headphone jack and a USB type C port for charging and file transfer. The tablet has dimensions of 212.5 x 124.7 x 8 millimeters and a weight of 366 grams, and comes with a bright green protective casing with a rear ring to improve grip and serve as support for incorporating the device. 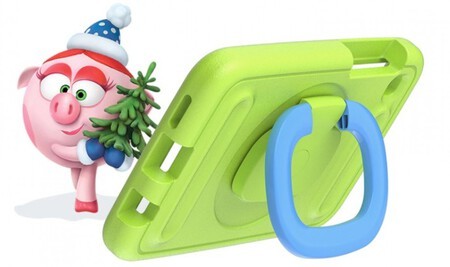 As we have mentioned before, the tablet arrives in a single version of RAM and internal storage, 3GB and 32GB, and initially lands on Russian soil. There it is put up for sale for 15,000 rubles, which currently translates to about 180 euros, and at the moment we have no news about a possible international commercialization.