Shazam has been updated to include YouTube Music, Google’s music service, among the third-party applications that integrate. Following Apple’s purchase of Shazam, the app typically invites the user to open Apple Music as soon as Shazam recognizes the song, although it also had integration with third-party services such as Spotify and Google Play Music.

Google Play Music has evolved to YouTube Music, although Shazam did not yet integrate the reproduction of the recognized contents in this application. Now the app is already compatible with the Google music service, so we can open YouTube Music from Shazam to play the songs it has recognized. 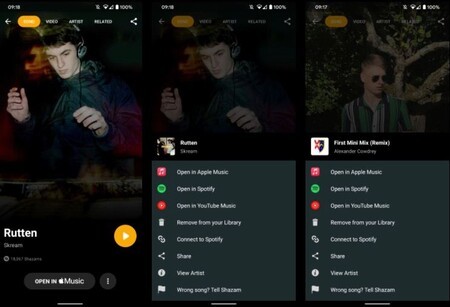 Until now it could be played through Spotify, but there was no direct integration with YouTube Music. Now, just click on that service to open the song and let’s go directly from Shazam to this app.

The novelty has already arrived in Spain, so make sure you have the application updated, both Shazam and YouTube Music, to avoid incompatibilities. This is a simple novelty, but relevant for all users of Google’s music streaming service.