Samsung begins to get used to the renewal of their phones in the middle of the season, devices that hit the market with the surname “s” and that are found in both their A and low M families. The next to arrive, if the information that arrives now is trustworthy, it is the intermediate generation of a well-known telephone, the Samsung Galaxy A51s 5G.

Observing his last name we realize that the Samsung phone will maintain the connectivity exhibited in the previous model, the Samsung Galaxy A51 5G that we already have circulating in Spain. However, and despite the logical similarity to the wait for the Galaxy A52, this “s” model will come with the occasional interesting change. For example, replacing your Exynos processor with a Qualcomm-signed Snapdragon.

Snapdragon 765G and 6GB of RAM 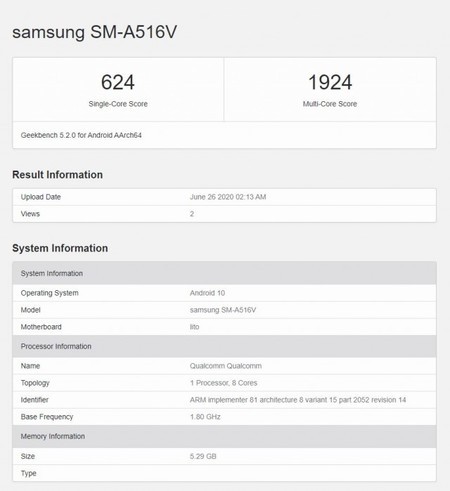 The leaked data has come from Geekbench and other sources, such as the Wi-Fi Alliance and the NFC Forum. All of them contribute their little grain of sand to compose a phone from which it would have been plausible to doubt if they were separate information. But here we are, with Some features of the Samsung Galaxy A51s 5G that take us to the mouth.

For example, the previously mentioned change of your processor. If in the Galaxy A51 5G we had an Exynos 980 of the house brand, now we would find a Snapdragon 765G, a mid-high range processor or, as it is known more and more frequently, a premium mid-range. A processor that seeks to exploit the graphics power with its surname ‘gaming’ and that offers, of course, 5G.

In the reported data it is observed that the chip would be accompanied by 6GB of RAM and we do not know at the moment if we will find more versions when the time comes to place it in stores. This Galaxy A51s 5G would arrive with Android 10 running under OneUI 2.1, would have the aforementioned 5G connectivity, with WiFi 5 and with an NFC chip for mobile payments.

Knowing that it is a slightly improved or altered version of the Galaxy A51, we must assume that many of its features, in addition to the external appearance, will coincide so we expect the same phone with 6.5 inches perforated Super AMOLED, with four cameras on the back and with at least 4,500 mAh of battery with 15W fast charge. We will see when it comes, a moment we trust will come soon.