Over the past few years, Android games have been evolving and finding the best way to earn income for their respective developers. The battle has been won by the revenue format through internal purchases, which is usually known like “free-to-play”. We can play without paying but by paying we evolve more quickly, and this has made Google adapt its store to the new times.

The latest changes that Google will introduce have to do with the latter but also with the purchases of applications and games themselves. The Mountain View team has discovered that owning a credit card is not as widespread as it seems and is already preparing a physical payment system for its apps and games within Google Play: that is, that we can pay with cash.

This is how Google proposes that we buy with physical money 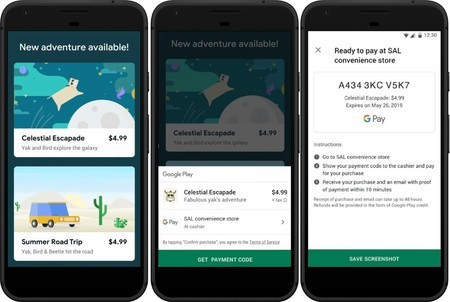 We do not speak in any case of a novel system, not even for Google itself, since this payment for apps and games, and even internal purchases in the games themselves, with physical money already works in countries like Indonesia and Malaysia. It happens that Google intends to bring this proven payment system to the rest of the planet, or at least that follows from the version 3 of the Google Play “Billing” library.

The system consists in that when we are going to make a payment for a game or an app, Google Play offers us a new modality that is that of paying in cash. We are not talking about being able to pay with coupons, in the style of those that we can buy in stores to convert it into a Google Play balance, although the system is similar. When we choose to pay in cash, Google generates a unit authorization code.

Now we just have to take that code to an authorized location, and we will see which ones are authorized in the rest of the countries to which the function will be expanded, to there pay the indicated amount with physical money. Once the payment is made, Google unlocks the purchase on our Google Play without having to provide personal data at the time of purchase. We pay a code that for the establishment is anonymous, so the door opens so that we can also make gifts with the same system.

Now, therefore, it is time to wait for this version 3 of Google’s Billing library to expand to phones in other countries, thus activating the purchase of games and apps with cash. We will see how it works a few years from now, although for Google it will always be interesting to have as many payment methods as possible. We will be attentive to announce your arrival.