A new ROM adapted from the Samsung Galaxy S20 brings many of the advantages of the highest range, in addition to Android 10, to low-end mobiles such as the Samsung Galaxy J5 or Galaxy A3. The ROM is based on Project Treble and includes the One UI 2.1 layer.

We always say that Android phones have a new life thanks to the effort of altruistic developers and their ROMsBut the great work they do almost in the shade never ceases to amaze us. This is the case of a new ROM adapted from the Samsung Galaxy S20 that carries One UI 2.1, and much of the advantages of the high-end, to low-end mobiles with the Exynos 7870 processor. A new life for mobiles like the Samsung galaxy J7.

The Samsung Galaxy A3 or Galaxy J7 to the Galaxy S20 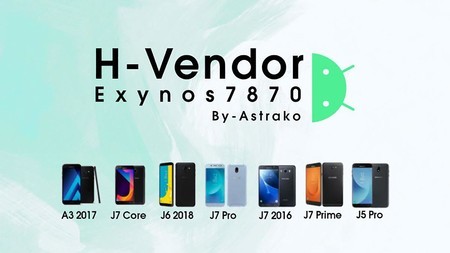 It is not a simple process, it involves some risk and, of course, it is unofficial, but it is still an alternative for all those who have a phone with Exynos 7870 that is outdated. In addition to uploading to Android 10 with One UI 2.1 mobiles like the latest Galaxy J5, J7 or Samsung Galaxy A3, the developer has added many of the advantages of the Samsung Galaxy S20. Even has included call recording in ROM.

The ROM has been adapted by Astrako, a developer who has made his creation available to the owners of various Samsung Galaxy with the Exynos 7870. The currently supported mobiles are:

The ROM is based on GSI and depends on an adaptation of Project Treble for the aforementioned Exynos 7870, also made by Astrako. H-Vendor, name of the project, is already available in its initial version, although At the moment it has some errors, such as that Bluetooth calls do not work. If you have one of the aforementioned mobiles, and you want to take a risk with H-Vendor, you can go to this XDA Developers thread to know the procedure and the links to the downloads of the ROM based on the Galaxy S20.