Almost a year ago, Google bought Socratic, the popular application that helps us solve homework thanks to Artificial Intelligence. Along with the acquisition announcement, they launched in August 2019, and for iOS, the renewed and renamed application Socratic by Google.

For the Android version we had to wait until February of this year, and as in iOS, the new Socratic from Google It arrived in English despite the fact that the application was originally translated into Spanish for years. Luckily this problem has been fixed in its new update. Socratic is already in Spanish and adds a flashlight in its latest version.

Socratic, the Google application to solve your doubts 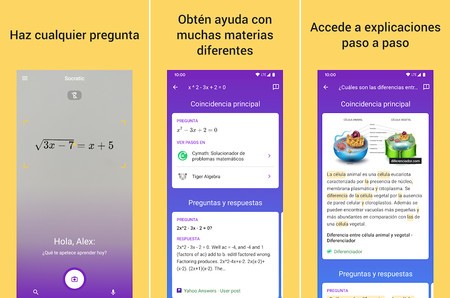 Socratic It is a simple but powerful tool that helps us to solve problems and exercises just by taking a photograph. After selecting the statement or mathematical formula, Google’s artificial intelligence will look for the solution or possible resources to help us do that exercise step by step.

Socratic It is prepared to solve any type of problem that we can find at any level of secondary, high school or university. The application also allows us to type the question with the keyboard or dictate it by voice.

In a future Socratic Google Lens will be integrated, as we saw a couple of months ago through an “education mode”, where Google Lens will do the same, analyze a question or mathematical problem and show how it is solved.

Socratic by Google: the application that helps you do your homework is updated in Spanish