‘The Mandalorian’ is being one of the greatest hits of the year: the Mandalorian series accompanied by ‘baby Yoda’. Google wanted to get even more out of this series making an augmented reality app based on ‘The Mandalorian’, to offer an experience that revolves around it.

At the moment, the application is restricted to a few Android models, but Google explains that little by little it will reach more. We are going to tell you how the application works and what you will find when you install it, since it is always curious to see what Google achieves with augmented reality.

The app will allow you to recreate scenes from the series in augmented reality: you will relive the first season of ‘The Mandalorian’ from your phone

This application has been developed together with Disney and Lucasfilm, to create hyper-detailed models and animations as realistic as possible. Using Google’s ARCore platform, they have created scenes that interact with our environment and respond to it. Through the phone camera we can see Mando in the middle of our house, on the street or anywhere we want. 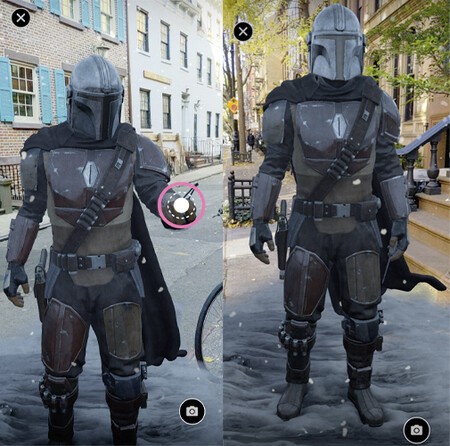 The app is based on the scenes from the first season of ‘The Mandalorian’, so we will see Mando perform actions from that season and … yes, we can also see the ‘boy’ while we relive the scenes. For the moment, this is the list of compatible mobiles, which will be expanded in the future.