During the event in which it announced the availability in Spain of the Realme GT Neo 2, the Chinese company has also confirmed the arrival in our country of two new devices from its “C” family, which includes the most affordable terminals.

It is the new Realme C21-Y and Realme C25Y, two entry-level models that were already presented in the Asian market a few weeks ago. The first stands out for having the high reliability certification of TÜV Rheinland, while the second is characterized by having introduced the 50 MP cameras in the “C” family. And both cost less than 200 euros. 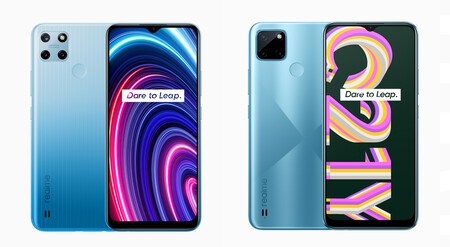 The new Realme C21-Y is already on sale at two different colors (blue or black) and in two configurations depending on memory:

For its part, the Realme C25Y, which has also gone on sale now, can be found at glacier blue or metallic gray and in a single configuration:

In addition to a 5000 mAh battery, the Realme C21-Y stands out for including a 6.5-inch HD + screen, a rear fingerprint reader and a 13 megapixel camera with artificial intelligence and PDAF autofocus.

At the controls it leads Unisoc T610 processor with two RAM options and two internal storage options. It also has facial recognition and a slot for three cards (two SIM and one microSD).

The Realme C25Y also has a 6.5-inch HD + screen, fingerprint reader and a 5000 mAh battery with 18W fast charge and Super Energy Saving mode. Here the processor is also from Unisoc, but in this case, it is the T618 model.

Its most important feature is the rear camera, as it has a 50 megapixel main sensor along with a macro lens and a monochrome lens, both 2 megapixels. The camera also supports AI beauty feature, HDR mode, and Portrait mode among others.