Samsung decided long ago that in its average and economic ranges there would be intermediate lines in the middle of the season. This is how models with the surname ‘s’ were born in their catalog, such as the Samsung Galaxy M01s is on its way And that, if everything goes according to plan, it should debut in the coming weeks as the cheapest new model in his entire family.

Now, the Samsung Galaxy M01s has exposed some of its features by showing us that it might not be such a new phone after all. At least it is what it seems when observing that its leaked characteristics are very similar, like a twin to another, to those of the Samsung Galaxy A10s that we already saw arriving on the market in August of last year.

The characteristics according to Google 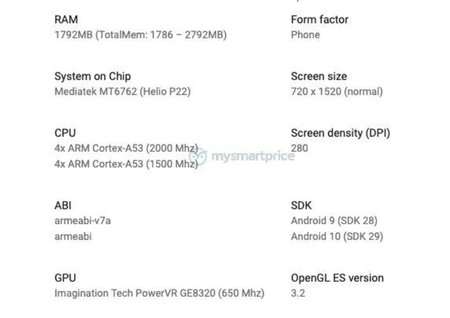 Because it has been Google, through the Android developer console, that has exposed several of the key specifications of this future Samsung Galaxy M01s. For example, having a processor Helio P22 signed by MediaTek, a processed under the model number MT6762 that we had previously seen in the Samsung catalog on board the aforementioned Galaxy A10s.

This brain would be accompanied by 3GB of RAM and it would have a HD screen with a 19: 9 ratio. That is to say, 1,520 x 720 pixels, in addition to having a V-shaped notch. Together with these characteristics we find others such as WiFi 4 connectivity, Bluetooth 5.0 or a battery of 5,000 mAh no apparent fast charge, plus Android 10 under OneUI as the operating system.

Given that the phone is practically the same as the Galaxy A10s, which makes one change a name model to fit a new line and a new market, we can deduce that it should mount a 13 and 2 megapixel dual rear camera. One sensor for normal photography and one for depth measurements.

As for the front camera, if everything goes as expected, it should be 8 megapixels. The phone has already gone through different phases of its certification process, so its arrival on the market must be very close. We could see it land in India in a matter of days or a few weeks, to wait after its arrival in the international market. If it finally occurs, of course.