FluBot is the main Trojan in the FedEx SMS scam, which made so many front pages last week. From Xataka we thoroughly analyze their behavior with the help of Linuxct, an expert in cybersecurity. This expert has just published an app on the Play Store that promises to eliminate malware easily, one of the methods to uninstall it along with safe mode or factory reset.

We are going to tell you how the app works and what the developer behind it tells us, since it promises to eliminate Flubot from our phone in a few simple steps, without the need to access special modes. 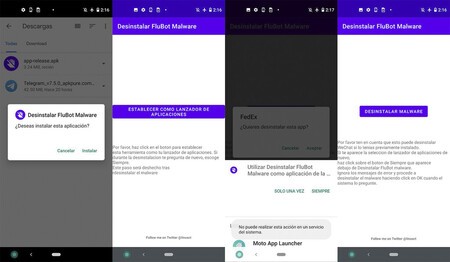 Linuxct has developed an application capable of removing Flubot, the SMS scam malware. From Xataka Android we were able to test it successfully in its initial version so, in our tests, has managed to remove the malware in seconds.

This app works like a launcher to “catch” the malware when it tries to escape to the desktop. When you return home, you will return to that app to delete it

The operation of the app is curious. In our in-depth analysis, which we recommend you read, we explain that when we try to delete the app, this makes three taps on home to run to the launcher and that we cannot access it. This app is set as a launcher in such a way that when Flubot tries to go back to Home, just back in the launcher, which is said application to remove it.

That is why we must set this application as the default launcher. All you have to do is hit the uninstall malware button to remove the virus. In our tests it has worked both in Android Stock and in heavy customization layers such as EMUI, although we have not been able to verify it in all layers.