The Poco M3 landed in the Xiaomi catalog on November 20 of last year and became an instant in the revolution of the budget Android range. The phone offered entry-level mid-range specs but a low-end price that’s hard to beat from its competition, and it’s soon to have a bigger brother.

He had already been talked about among rumors but now Poco itself, a brand of the Xiaomi ecosystem, has just confirmed both its existence and its presentation date and some other characteristic. Your name will be Poco M3 Pro and we will see it presented on May 19 at 2:00 p.m., Spanish time. 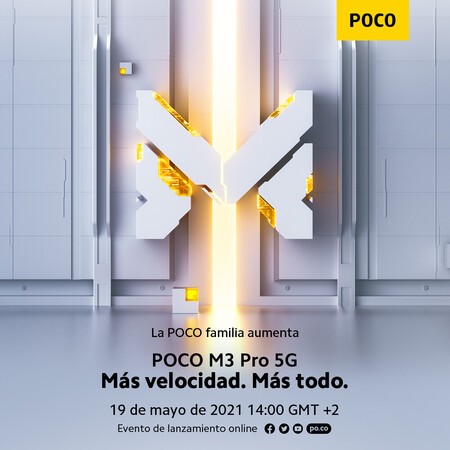 As we say, it has been Xiaomi itself that has confirmed that the Poco M3 Pro will hit the market on next May 19, next Wednesday, and that its presentation will be held at 2:00 p.m. in Spanish time, although it will be held in India. But in addition, its CEO has granted an interview in which he has revealed more details.

The phone is called Poco M3 Pro 5G so there is no question about what mobile connectivity it will offer, but still the CEO has confirmed that the brain chosen for it will be a Dimensity model from MediaTek. It has not been specified which one but we expect the Dimensity 700 or a very similar one, having been the processor of choice for the Redmi Note 10 5G.

In addition to this processor and its connectivity, the CEO of Poco has confirmed that on board the Poco M3 Pro 5G we will have a high refresh rate so we can expect 90Hz minimum, since 60Hz is and has been the standard until now. We will see how this refresh rate affects autonomy because although the size of its battery has not been revealed, we expect about 5,000 mAh for the M3 Pro 5G.

The Future Poco M3 Pro 5G Aims to become the cheapest 5G phone in Poco’s catalog, and also the cheapest of the entire ecosystem chaired by Xiaomi. We will see if it is also the cheapest model with 5G on the market. Only time will tell, and that time will run out on May 19 at 2:00 p.m. Spanish time.