New products for Amazfit’s long portfolio of smartwatches: the company has just announced two new watches in Europe. Elegant, with a classic design, with more than decent autonomy and a price to match the brand: The Amazfit GTR 3 and Amazfit GTR 3 Pro aim high.

It is the company that manufactures the already mythical Xiaomi Mi Band and one of the brands that has done the most for the popularization of the wearables. Because Amazfit does not have anything else, but watches have a great deal: its portfolio is as extensive as it is varied. AND targets all price segments, even the aspirational mid-range. The Amazfit GTR 3 and GTR 3 Pro are a good sample.

The new generation of Amazfit GTR offers a round dial with an AMOLED panel that is available in two sizes: 1.39 inches for the Amazfit GTR 3 and 1.45 inches for the top model, the Amazfit GTR 3 Pro. Both include a touch screen, offer two physical control buttons on the side and maintain the already usual 5 ATM pressure resistance. With one key feature: the top button is a rotating crown for scrolling through menus.

The two new models incorporate Amazfit’s own operating system and a processor that we do not know. We do know the batteries of both: 450 mAh. With a curious detail: since the Amazfit GTR 3 pro has a larger diagonal screen, its autonomy is reduced in about six days of typical use. Something inexplicable for a “pro” device.

The two watches have a case made of aluminum and a good number of sensors on the inside. Heart rate sensor and blood oxygen saturation reading. Both measure activity and record sports exercises (more than 150 modes), incorporate sleep tracking and offer compass, barometric altimeter and precise satellite positioning. 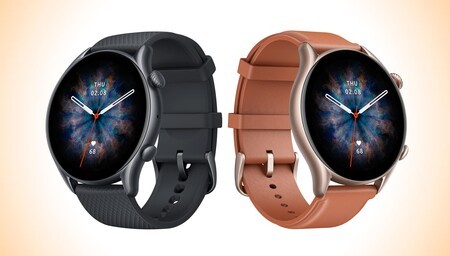