Everything indicates that it will not be long before we have news from the OnePlus mobile phone development team, although the news could be multiple. The CEO of the company declared a few days ago that would return the cheapest models of the brand, perhaps referring to the previously leaked OnePlus Z, and possibly other accessories.

Now, with a rumored release for the month of July, the OnePlus Z has leaked again, or at least an alleged OnePlus Z because the name has not yet been made official by the oriental brand. The model has appeared in a leaked benchmark showing a super mid-range brain manufactured by Qualcomm and nothing more and nothing less than 12GB of RAM. 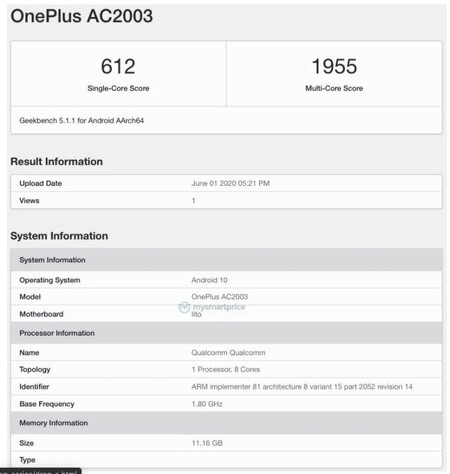 As always when a mobile phone is filtered through a performance test, we will take the data with some caution as there is a way to falsify it. What is shown in this Geekbench that continues to hang on the website of the aforementioned benchmark is a supposed OnePlus phone, a OnePlus AC2003 that had previously been linked to the OnePlus Z, running with 12GB of RAM.

The processor reflected in this benchmark is the Snapdragon 765G, which means several things. The first, that we would have added graphics and computing power to improve performance in video games (the G for Qualcomm is ‘gaming’). The second, that the phone would have 5G connectivity because the Snapdragon 765G comes with a 5G modem sewn to the SoC itself. The third, that we would have fast charge although it is unknown at the moment what will be its top.

Some previously filtered data about this OnePlus Z have told us about a 6.4-inch screen, a triple camera system with 48, 16 and 12 megapixels and 4,000 mAh battery with up to 30W fast charge (viable depending on the processor). Two of its versions had also been leaked, with 8GB / 128GB and 8GB / 256GB, although it seems that we could have an extra version with 12GB. The arrival date continues in July, although without a specific day.