Realme X50 Pro owners can now test first hand how is Android 11 and what will bring the next great version of the operating system– The brand has released the ROM with the beta for that device. In addition to the new features of Android 11 beta, the firmware also includes Realme UI.

Google released the first beta of Android 11 almost a month ago after having released several developer versions. And one of the novelties was the opening to other mobiles apart from the Pixels, an advantage for some lucky people because there were brands that positioned themselves to be the first to develop an update. OnePlus, Xiaomi, OPPO and also Realme, all these brands promised to adapt Android 11 beta. And the last one has also fulfilled. 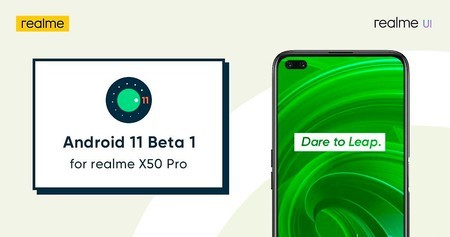 The Realme X50 Pro is the brand’s most powerful mobile to date, also one of the ones with the best photographic capabilities. Armed with the Snapdragon 865, a beast for gaming and for mobile connectivity, the Realme X50 Pro is now more versatile as officially acquires the ability to install the latest developed version of Android. Of course, it is a beta, with all the stability risks that this implies.

To install this first beta with Android 11, you need the relevant Realme X50 Pro, the brand’s only mobile suitable for this software, and follow the relevant steps to ‘flash’ the ROM on the device. As usual, installing a firmware experiment poses serious risks to the phone. Also, all data is erased with installation, you have to consider this.

Android 11 beta works reasonably well on the Realme X50 pro, although there are some drawbacks detected; how some system instability, some cosmetic errors, the automatic time functions may not work correctly, and certain applications may not start on the phone. We must remember that it is a software under test, it should not be installed if all risks are not assumed.