With WiFi calls you can take advantage of the connection to an access point to talk to any phone number. No extras in the rate, with greater stability and no matter that there is no mobile coverage. Of course, you need a compatible mobile phone and operator.

They are not a very popular feature since it is not excessively widespread either, but there are possibilities to test WiFi calls on a good number of smartphones. Such calls are established through home wireless networks, as dictated by its own name. They operate without mobile network coverage, offer good audio quality and a large part of the majority Spanish operators offer them free of charge to their customers. And they are very easy to use if the mobile is compatible.

Call even if you don’t have mobile coverage

Icon indicating that calls are made over WiFi

As with communications through messaging apps, WiFi calls (o VoWiFI, voice over WiFi) use local wireless networks to establish contact between the devices and transmit the voice of the parties converted to digital data at both ends. The biggest difference from ‘normal’ calls is that operator towers are not used with WiFi calls since the user’s wireless network is served.

WiFi calls offer several advantages over traditional calls thanks to the characteristics of the infrastructure:

Despite the fact that the WiFi network is used, all calls that make use of this network cost the same as ‘normal’ calls. At the pricing level there are no differences

The basic difference at the operating level is that the phone changes the sending and receiving of data (voice only) from the telephone network to the WiFi network: The rest of the process is identical for both types of calls. There are hardly any changes to the phone interface either.

How to activate WiFi calls on the mobile 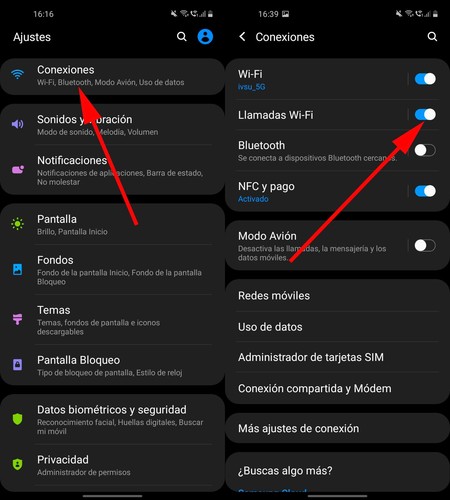 Usually phones that support WiFi calls offer the possibility of activating them when a SIM is inserted that supports them. In Spain, Movistar, Orange, Amena and O2 offer this type of communication. In terms of mobiles, Samsung is the manufacturer that offers better compatibility: its higher priced phones, and a good part of the Galaxy A family, include Wi-Fi calls among its options. Also the iPhone from the 5S; in addition to other brands, such as Huawei, LG and even Alcatel. And it’s not just a phone thing, support for WiFi calls also depends on the operator (Orange is the one that more devices supports).

To activate WiFi calls, and as long as your mobile and operator are compatible (the SIM must be on the phone), you must do the following: 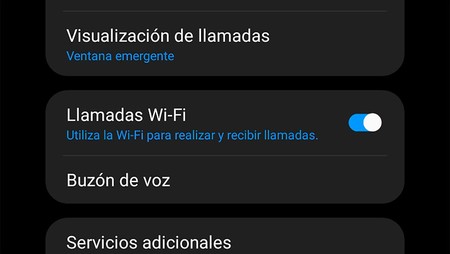 Activation of WiFi calls from the phone app

To check which mobiles are compatible with WiFi calls in the different Spanish operators you can go to this article: there you have the complete and updated list. Even so, that your mobile does not appear does not imply that it lacks those calls: the operators are constantly adding new compatible mobiles.

Experience is similar to ‘normal’ calls

Call in progress via WiFi network

We have been testing WiFi calls on a Samsung with the operator Movistar and the truth is that the experience was satisfactory: after the activation process, the phone has exchanged the mobile infrastructure for the WiFi network without losing audio quality and gaining remarkable stability in telecommunications (In the test home there are usually cuts in the communication due to coverage deficiency). The phone icon with the WiFi waves is the only noticeable difference at a glance.

What are WiFi calls and how can you activate them