In this series we look back at apps from the past that were very popular at the time and that we don’t hear as much about today. After remembering Timehop, ES File Explorer, QuickPic, Link Bubble and more, today we remember possibly lThe most popular alarm app for Android: Timely.

Timely is a clock and alarm app, a category of apps that we normally don’t pay much attention to as long as they work properly. However, Timely managed to capture our attention with a design that stood out a lot in its time.

Timely was launched with the tagline of “the beautiful alarm clock”, which perfectly defined the application. It was a simple clock and alarms application that stood out for its design and for doing the same as other similar apps in a different and more visual way.

We are talking about the time of Android Jelly Bean, with the Holo design very established and Material Design still in the oven of Google. Back then Android apps were often pretty ugly, while Timely brought vivid colors with gradients, animations and various themes to choose from. 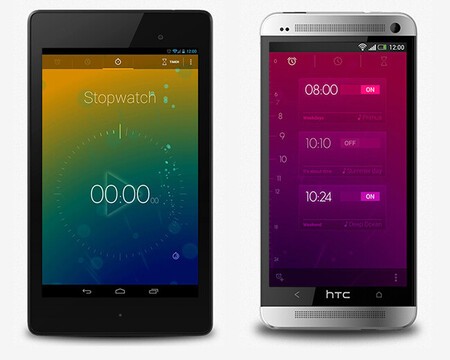 Instead of entering the alarm time as in a calculator, in Timely you could use gestures to have a somewhat more entertaining experience and with a fully customizable design. All this with some very cool features for then, like the synchronization of alarms between devices or being able to postpone the alarm after turning the phone upside down.

What happened to Timely? 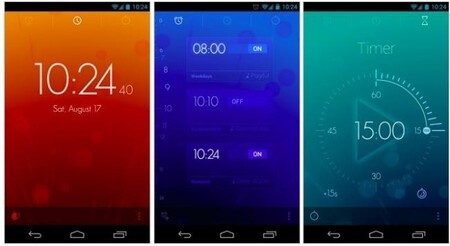 As we mentioned before, Timely came stomping in 2013, created by a small Swiss company under the name Bitspin. It didn’t take long for the app to catch the eyes of Google, who bought it a year after its launch, in 2014.

Bitspin -and Timely- became part of Google and this brought good news for users. All premium features became free (used to cost $ 2.99). Bitspin’s statement about the purchase ensured that they would continue working on the application and that Timely would continue to work as it did until then.

The truth is that Timely received a couple of updates after his purchase by Google, as is the option to choose his own alarm sound, but from a certain point got stuck in front of the Google Clock app. Google Clock has not stopped receiving news to this day and, although it was expected to receive Timely’s designs, it has not finally been the case. 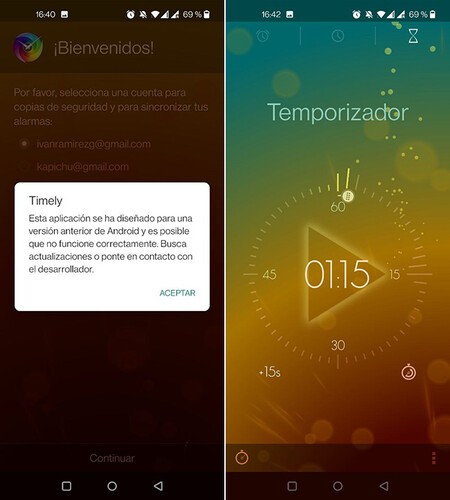 Timely continues to work from its APK, although it shows a warning that it is based on an old version of Android

After years left to its own devices, this year Google announced the closure of Timely and the app disappeared from Google Play in June. Today you can continue installing it from its APK and, after accepting the notice, it works relatively well.

Does it still make sense today?

Timely was an application that stood out for trying to do things a slightly different and much more visual shape than usual. There are hundreds of clock and alarm applications, but not all have put as much effort into the final product as Timely did.

That concept is still more alive today than ever and best of all, it can be applied to any application. Not all applications that go outside the conventional end up being a success, but it is undeniable that they achieve at least stand out from the rest. A recent example of could be for example Niagara Launcher. 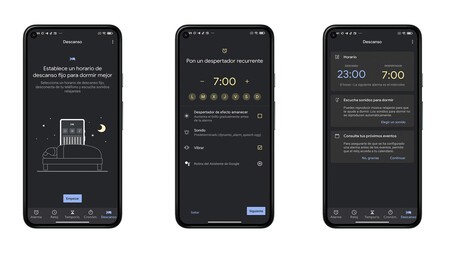 Google Clock has not inherited the customization of Timely, but the spirit of taking alarm apps beyond the typical

Google Clock is Timely’s spiritual heir, and while its design is much more drab and boring than Timely, at least Google has stuck with the idea of try to take a simple a priori type of app further. Thus, Google Clock added curious news such as rest mode or integration with Spotify.