Android TV televisions and players are about to gain a way to access video calls: Google Duo prepares an app to bring this communication system to said Android TV. It will first be in beta and it won’t take long to appear on the Play Store.

With the sudden rise of telecommuting, video calls have also made a rebound, which is why we have them on a large number of devices. Mobile phones and computers, of course, also on smart screens or on TV thanks to the Chromecast. And they will also come to Android TV since Google has announced the future availability of a beta of Duo. Of course, you will have to connect a webcam to the TV if it does not have it.

Video calls on TV with the help of a webcam 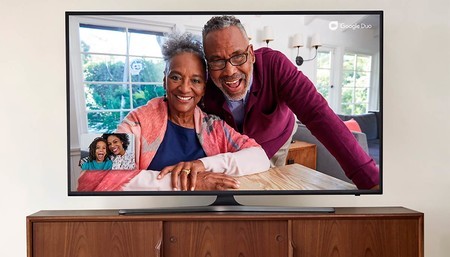 Google today announced on its blog that it is expanding video calling from its Duo and Meet platforms to screens other than mobiles, tablets and computers. We already knew the compatibility of Meet with the Chromecast, also that group communications could be done on devices like the Nest Hub. And Android TVs will also join video calls, even though there is a stumbling block to overcome: players and televisions with Android TV usually do not include a camera as standard.


As Google has confirmed, the idea is to expand the use of Google Duo (which sooner or later should become Google Meet) using external hardware on Android TVs. This implies that you will have to connect a USB webcam to the television devices and trust that their control software is ‘plug and play’. The Google Duo beta, which is not yet operational, recognize the camera connected to the computer and enable it for video calls in conjunction with the remote control microphone, the same one used to invoke Google Assistant.

By using television to make video calls, and making use of an app adapted to Android TV, anyone with this operating system will have access to communicate with their friends, family and co-workers. In addition, you also have the option of using Google Meet on your computer or mobile sending the image to the built-in Chromecast of the Android TV. It is strange that Google has not taken the opportunity to integrate Meet directly into Android TV.

As we said, we do not know when the beta of Google Duo for Android TV will be operational: the company ensures that during the next few weeks. We will be attentive to download it and, of course, to test it.