Google has announced a new academic mode for Google Lens, its tool integrated into the camera of Android devices to analyze the content that is being viewed through it. Lens was already able to recognize texts and transcribe them, restaurant menus and, in general, all kinds of objects and text, but he had not been able to solve mathematical equations, something that represents an important step forward.

It is an academic way that will allow you to recognize the equations and solve them step by step, a function that draws from Socratic, the Google application to solve math problems just by taking a photo. We are going to tell you how this new academic mode of Lens works, since it is one of the most curious functions that they have ever implemented.

In search of providing academic resources to students 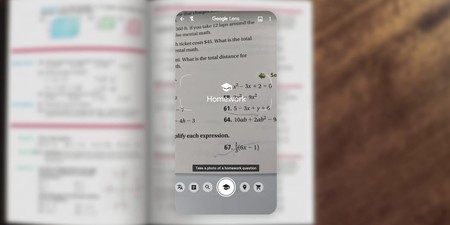 Google’s goal with the new Lens tool is help students with academic resources for the next course, for all those who have to study and work from home due to the current situation of COVID-19. This academic mode will recognize all kinds of equations and other operations. You just have to select the equation that you have recognized so that explain it to us step by step.

Thanks to the purchase of Socratic, Google can incorporate its technologies into Google Lens

This feature was built into Socratic, the app that Google bought and whose technologies it is now leveraging in Google Lens. To use this function we must activate the ‘Homework’ or ‘Homework’ mode of Lens, which is not yet active in Spain in our tests, but that shouldn’t take too long to arrive.


In addition to this feature, Google is integrating more resources in the search engine, so students can view STEM concepts from biology, chemistry, and physics in 3D. You can always access the list of 3D elements in the Google search engine to periodically check the elements that have been added.