For a few months the Google translator allows us to transcribe and translate our voice or that of another person in real time, a perfect feature to translate a talk or conference.

Well, since its launch last March it suffered from a great lack: it did not allow save the transcripts, until now. The latest update of the Translator fix this problem.

Now we can easily save all our transcripts, for this the first thing we have to do is start making a transcription activated first the mode Transcribe, and then, when we have finished translating the talk, click on the star icon. We put a name to the transcript, save it and we can read the conversation again later from the Google translator.


The saved transcripts can be found in the side menu of the Google translator. There we can change the name or delete them. By opening a transcription through its settings icon we can change the font size, theme or display the text in its original language. 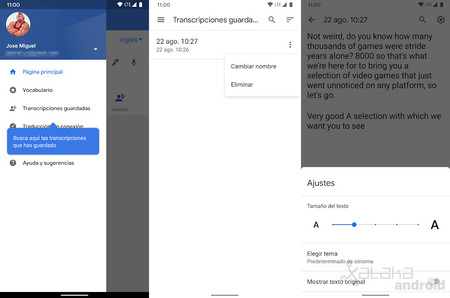 The Google translator allows us to transcribe already in nine languages, by English, French, German, Hindi, Portuguese, Russian, Spanish, and Thai He has just joined the Italian.