Samsung terminals come with a launcher customized by the company itself. One of the advantages of moving away from Android Stock is that the possibilities to customize the phone are greater, and this launcher is proof of that. We are going to show you how you can delete multiple apps at the same time thanks to him, since it is a somewhat unknown option that Samsung does not usually indicate.

All you need is a relatively updated Samsung mobile (in our tests we have used a Galaxy S20 +) and have the launcher updated. The option is not completely hidden, but it is not very common to use so it is normal not to know it.

So you can uninstall multiple apps in one sitting 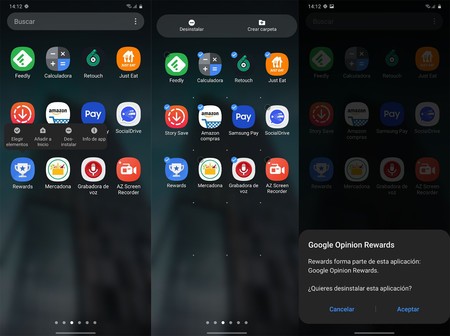 To delete an application from the Samsung launcher, the most common is to leave it pressed and click on ‘uninstall’. This is the conventional Android method and the same one that Samsung uses in its launcher. However, if we want delete multiple apps in one sitting we can do it in a very simple way. We just have to follow the steps that we show you below.


The only downside to this method is that you have to accept the uninstallations one by one. However, it is much faster than selecting them individually, since the accept message appears automatically when we delete these apps.