Most of the apps always remain available in the Android app store, but there are always developers who decide delete your creation so it can’t be downloaded anymore. But this does not stop it from being within your reach: from re-downloading it from your library to using an APK, you have a multitude of options.

It is possible that in the Google Play store there are thousands of similar apps, but it is enough that the one you use to disappear so that you do not find another application that fits your tastes. Some disappear because Google finds problems with its operation, but often they are no longer available because the developer cannot maintain them or because he prefers put all your efforts into a new app. And these are not excuses to stop using them: an application that disappears from Google Play can remain just as functional. So how do you reinstall them? 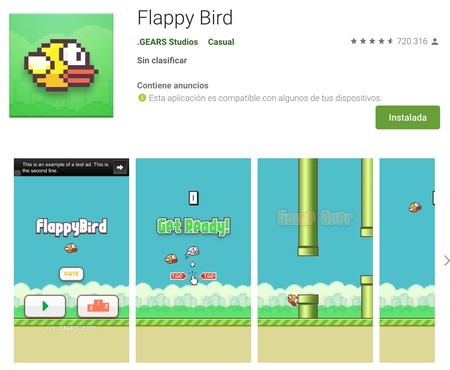 This is one of the main keys: despite the fact that an application appears as not available in Google Play, that does not mean that you have the tap closed to download it. Although yes, you must meet a requirement: have downloaded it previously. Or at least have bought it: in both cases the app will continue in your application library.

All applications remain on Google’s servers in the latest version uploaded by its developer. Always, yes, that Google did not delete the download for violating any of the terms of service. In this case the app will have been permanently deleted from the servers, so you won’t be able to access it even if you paid for it.

To reinstall the apps that disappeared, and provided that you previously downloaded (or purchased), perform the following steps:

For example, we can look up Flappy Bird, a very popular game a few years ago that the developer ended up disabling. But, as we downloaded it at the time, the reinstallation is still operational: the tab will appear as available whenever we access with our account.

That you don’t want to use the ‘My apps’ list because you have many apps in your library and it is cumbersome to find it? Supposing the app you want to reinstall was paid you can use a little ‘shortcut’: Purchased apps.

With this application you can access the entire list of purchases made on Google Play. This allows you to easily view all the purchased apps, whether they are inactive or continue to be available; with the option of reinstall them again by clicking on the specific app. It is much more practical than accessing the complete list of ‘My applications’, but only works with paid applications, not with the free ones.

In the event that you did not download the application before it disappeared from the Play Store, or if Google decided to delete it, you can always download the file as APK to manually install it on your phone. Please note that if the app was removed by Google from the store, you may have a malware problem or excessive advertising; in which case it is best to refrain from installing it.

Apk Mirror is a good place to download secure applications, also Apk Pure or UpToDown. Search there for the app you want and download the latest version. Then you just have to install the file on your Android.

How to reinstall missing apps from Google Play Store