Android is in itself a fairly versatile operating system that allows us to do a multitude of things, and those that we cannot do directly are complemented by the apps that we find on Google Play. But sometimes, some manufacturers decide to integrate specific functions in their layers and this is the case of Xiaomi with its option to extend the WiFi signal to which we are connected.

We are not talking about being able to use the mobile phone as a WiFi access point for other devices (although it is similar) because that implies that the Internet access occurs through the mobile data. What we are talking about is turn our Xiaomi into a WiFi repeater that extends the signal of the router of our home or office to expand the coverage. And that can be done natively with MIUI.

Using a Xiaomi mobile as a WiFi repeater

As we have said, MIUI has a function that allows extending the WiFi signal to which the phone is connected at that time (or the tablet, speaking of the Xiaomi Pad) although Xiaomi hides it a bit. Specifically, inside the Developer Options of the operating system, Android. So to get there, first we have to activate these developer options.

To activate the developer options on a Xiaomi mobile we have to follow the following steps: 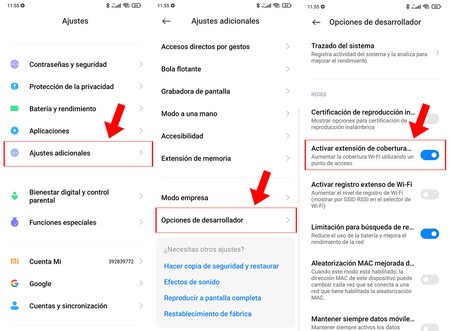 We have already completed the first step, the one that leads us to activate the Developer Options that are hidden in the operating system and in MIUI. Once we have made the section appear in the Settings, we are going to activate the WiFi network extender of the system.

Ready. Now our phone will be connected to the WiFi network that we choose but, at the same time, it will also broadcast that same WiFi. So the devices furthest from the router can connect directly to the phone to have an Internet connection. Of course, keep in mind that connection through repeaters is slightly slower So do not be surprised to find less speed than connecting directly to the router.