In this series we remember mobiles from the past that caught our attention by going out of the ordinary. After talking about the Samsung Continuum, LG G DoublePlay, Samsung Galaxy Beam, Sony Xperia Play and others, today it is the turn of the Motorola Backflip, with QWERTY keyboard and touchpad.

The Motorola Backflip is a terminal from the beginnings of Android – it is the third Motorola model – when it was still relatively common to include a QWERTY keyboard. What escaped the usual was the mechanism for unfolding the keyboard.

The specifications of the Motorola Backflip are almost laughable today, although it must be remembered that it has been more than a decade since its launch. The specs weren’t a big deal Nor for then, because it was not power that was sought in the terminal, but that “gimmick” of the keyboard.

To give us an idea, your MSM7201A processor has a lithograph of 65 nanometers and a single core at 528 MHz maximum clock speed. All this with 256 MB of RAM and only 512 MB of storage: these are not unheard of figures for the time, but neither are they the most cutting-edge available. In that same year, the Samsung Galaxy S and the Samsung Google Nexus S were launched, both with a 1 GHz processor and up to 16 GB of storage.

The specifications of the Motorola Backflip were somewhat fair even for its time, with 512 MB of storage and a 528 MHz processor

Part of the blame for these moderate specs lies in the size of the Motorola Backflip, which is a very small terminal, but forceful. With a 3.1-inch screen and a size of 108 x 53 millimeters, it was a little larger than the Sony Xperia Mini Pro (92 x 53 x 18 mm) and a little thinner. Even so, they are 15.3 millimeters thick, more or less twice that of current mobiles.

The Motorola Backflip did not have a front camera, something normal for the time. Now, in this case there is a good reason for it, because the rear camera could be used for taking selfies if the keyboard is displayed. Of course, it would be in a slightly strange position: in the lower corner, as in the original Xiaomi Mi Mix.

The Motorola Backflip was one of the first Android phones launched by the company. Back then mobile phones with a QWERTY keyboard were still very much alive. The novelty of the Motorola Backflip, and the reason behind its name, is the way the keyboard is displayed, which is not slippery as usual.

The Motorola BackFlip unfolded looks like a mobile with a typical QWERTY keyboard, but the difference is in the mechanism

A priori it may seem like an unnecessary complication compared to other more direct mechanisms such as the slide, or an “inward” rotation that puts the screen and the keyboard face to face when closed, although this mechanism had its advantages. 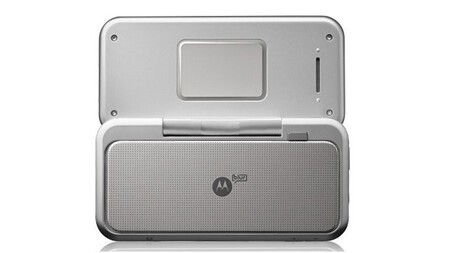 From behind, the Motorola Backflip had a small touchpad (above)

To make all of this possible, the Motorola Backflip it included the only camera and the flash on the keyboard, in the lower left corner. An ingenious solution, albeit with the side effect of smearing the lens while using the keyboard is normal. The keyboard includes keys for navigating the system, thus avoiding the need to touch the screen more than necessary.

As if this were not enough, there is a small touchpad behind the screen, which you can use to move through the different photos in your gallery without touching the phone screen. With a touch screen and a keyboard that also has arrow keys and must be unfolded to access the touchpad, it seems totally unnecessary, but the truth is that Motorola included a similar touchpad in several models.

Is there such a thing today?

The Motorola Backflip was born in the early days of Android and today, more than a decade later, the landscape has radically changed. For better or for worse, it is very difficult to find a mobile with a physical QWERTY keyboard. What is returning with the rise of folding and an Android system that is increasingly better prepared for all types of devices are the new form factors.

The Motorola Backflip innovated with a new way to include the keyboard and reuse the camera and today we have similar situations with folding mobiles or with two screens, like Microsoft’s Surface Duo. Also with a hinge, but for two screens instead of one screen and a QWERTY keyboard.

Another peculiarity of the Motorola Backflip is that its hinge allowed keep it standing by itself, either with the keyboard underneath (“laptop” mode) or forming an inverted V. Until a few years ago, this was still something quite unusual without the help of at least one special case for the mobile.

The spirit of the Motorola Backflip lives today in folding phones

Then came the Samsung Galaxy Flip, with a folding screen that can be adjusted to various angles, including right angles. Applications adapt to this format and one of these ways to adapt is precisely that the keyboard is displayed at the bottom and the content at the top. A similar concept to the Motorola Backflip.

The Motorola Backflip stood by itself

There is no hinged mobile to unfold the QWERTY keyboard nowadays, but the idea of transform the experience of using a device it is still very much alive, represented mainly by folding mobiles and the occasional experiment with dual screens and hinges.

Android started out as the Wild West with all kinds of strange experiments, and then turned into a boring homogeneity where all mobiles are more or less the same. Ten years later, experiments return cautiously, and it seems to stay.