As usual, Google only officially announces the news of Android 11 that will reach all devices, leaving unannounced other news regarding its own customization available for its Pixel and Android One devices, and that we are already discovering after updating to Android 11 Beta.

One of those Android 11 Beta news that the Pixel 2 has received onwards is the new Pixel Launcher, which has released some new application suggestions that will save us from opening the application drawer.

New suggestions from the bottom row

A couple of years ago, the Pixel Launcher already premiered app hints in the top row of the app drawer, but in Android 11 Beta now these are coming too application suggestions on the home screen, in the bottom row. 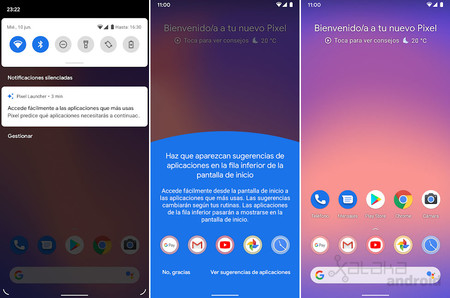 After updating to Android 11 Beta a notification will invite us to activate the prediction of suggestions, therefore it is an optional feature that by default it is deactivated. If we decide to activate it, a new row of applications will appear showing a colored border to differentiate the suggestions from the fixed applications. In that same row of suggestions we can fix applications so they don’t change.

Pixel Launcher will show us in that bottom row the most used applications depending on our routine, so that they adapt to the context, such as the time, location, connected headphones, etc … 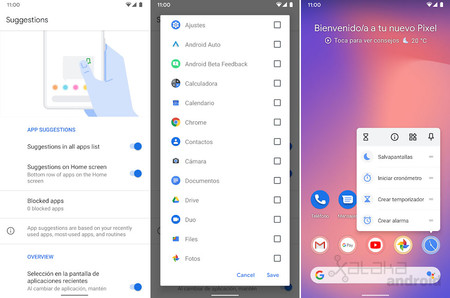 In the Home screen settings> Tips we can activate or deactivate the new suggestions, in addition to being able block apps so they never appear in the recommendations.