The Samsung Galaxy A50 has been one of the most successful terminals of the Korean firm in 2020. Launched at the end of 2019, it later saw as a renewal in the form of the Galaxy A50s arrived. A model, the latter, that continues to be the focus of Samsung’s attention, which now has started updating it with version One UI 2.5.

If we have already seen how they have updated One IU 2.5 terminals like the Galaxy A51, the logical evolution of the original Galaxy A50, now the Galaxy A50s is the one that receives the penultimate custom layer launched by Samsung for its terminals. With this model the firm continues the line already started with other mobiles like the aforementioned Galaxy A51, Galaxy A71, Galaxy M21s or the Galaxy M21.

Samsung just released the One UI 2.5 update, for the Galaxy A50s, which is the newest customization layer open to the public. An update that comes hand in hand with the firmware version with the number A507FNXXU5CTK3 and that begins its deployment in Vietnam.

We will continue to have Android 10, since Android 11 is now a thing of One UI 3.0. With the recent update, the Galaxy A50s once again receives a new version, since already in March it benefited from the arrival of One UI 2.0 next to the Galaxy A50.

With One UI 2.5 some of the features that we have already seen in other models arrive as is the case with the new Bitmoji functionality for Always On Display (AOD), an improved camera experience, a Samsung keyboard that now allows horizontal split use.

A coat of paint that also adds improvements in the app ** “Messages”, which now supports the SOS feature that allows users to share location messages every 30 minutes for 24 hours with their contacts.

We cannot forget that with this update come Google navigation gestures for third-party applications and an important security improvement, since it brings to this model the Android security patch from November 1, 2020. 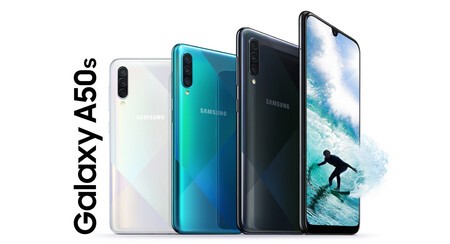 For now, the update to One UI 2.5 for the Galaxy A50s is only available in Vietnam, but if there are no problems, it should not take too long to reach other markets. If you have a Galaxy A50s you can check the availability of the update by going to “Setting” and entering the section “Software update” then click on “Download and install”.