The dark theme of the Google application reached all Android 10 devices a few weeks ago, and with it recently came a surprise: the dark google maps theme.

While the Google Maps application is still without a dark theme, except for navigation with its night theme, the web version of Google Maps has already released this theme through the Google search application.

This is the dark theme of the Google Maps website 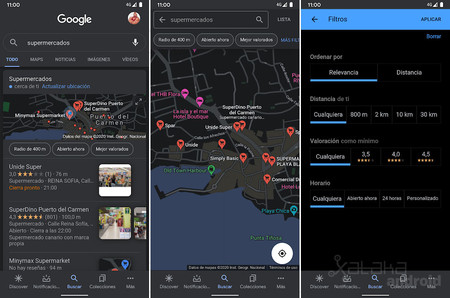 To discover what the dark theme of Google Maps would be like, we first have to activate the dark theme of the application or the entire operating system. Then we have to open the Google application and search for a term that returns close results on a map, such as “restaurants”, “cafes”, “supermarkets” or “hotels” … Finally, click on the map image to see the view of the web version of Google Maps with your dark theme.

This version of Google Maps allows us to see all its interface in dark tones, including the map, lists and filters, which allows us to get an idea of ​​what could come to your application when it is updated with its dark theme.

It is unknown when Google will launch this dark theme in their application. There are no references to this feature in its source code yet, but now that the company has launched it in its web version, it is expected that it will do the same with its application. What we do know is that there will soon be improvements to its interface, greater integration with Uber and more customizable routes.