The google play console It is the link between developers and users. All the applications that are published for more than two billion active devices throughout the world pass through it. Which represents an incredible audience and a great opportunity to immediately reach any corner of the planet.

If you have never published an app, surely the Google Play console is a big unknown for you. We are going to review some of its main characteristics, how it works and how developers view the information that this Android application administration panel offers you.

One of the requirements to have access to the Google Play console is to register as a developer paying the 25 dollars that registration costs, both for independent developers and companies. A fairly simple and inexpensive process compared to an Apple developer account (99 dollars a year for the individual and 299 dollars for the company). You can also access the console if someone with a developer account invites you to manage associated applications.

The tab of an app from the administration console

We start with the most visible part of an app, and a fundamental element for positioning in Google Play. This is where developers can explain what our application does, including real and promotional images. 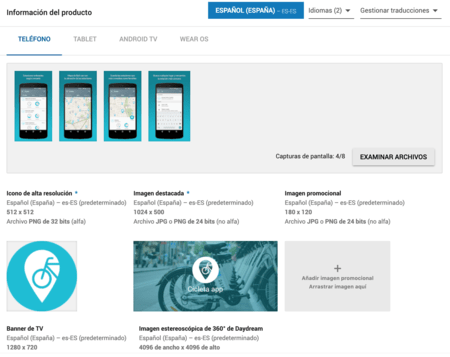 We have a panel to fill in the mandatory data such as qualification, short description and long (almost 4,000 characters to elaborate), graphic resources of the app such as the icon and some screenshots that show the user how it works. Of course, all the keywords and the most complete description will help you position yourself, as long as you respect the Google Play publication policy without interfering with trademarks or copying resources from other applications.

This is where we can choose the category of the application (essential to be indexed together with similar applications). In addition to the mandatory content rating form, which gives permission to publish the application to all audiences or with certain limitations.

We can also choose and provide graphic resources if available at more platforms such as Android Auto, Android Wear or Daydream. Choose the type of distribution: free or paid (adjusting the price for each country if we want).

We have the possibility of do experiments to see which promo image or description works best, there is a section to segment the selected audience to show certain content, in addition to seeing the metrics of that experiment.

The statistics are a fundamental element to know the impact of an application. This is where we can see the number of active installations (devices active in the last days), also the uninstall percentage o la star average that our application gets for a period of time. And a frequent question from developers, the percentage of users who have each version of the operating system, especially when you want to stop supporting problematic versions such as pre-lolillop. 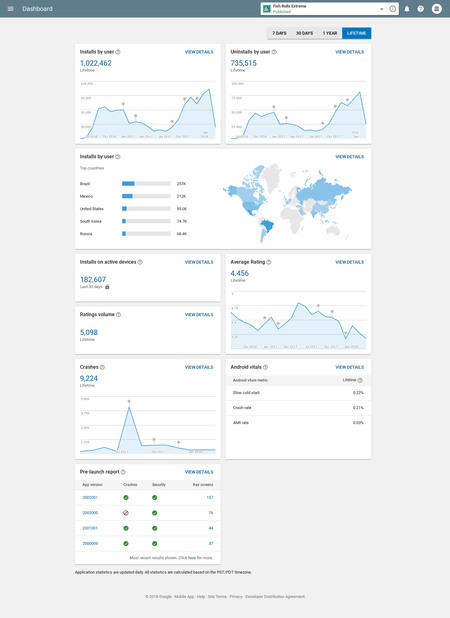 Most of the information can be inspected by applying different dimensions such as the type of device, country, language or the version of the application. If we want to analyze in more detail specific statistics of conversions or visits to a specific screen we have to resort to Firebase Analytics that offers a multitude of possibilities by marking each event that the user performs, as well as demographic data of the application’s audience.

To launch a new app update let’s go to the section “Version management”, where we can distribute a new apk on the channel beta O alpha before it is available to everyone. Almost all applications with a large number of users have several versions available for the beta tester community, this ensures early feedback and avoids possible failures to other users and, of course, allows testing of experimental functionalities. From here we can define the users to whom we want to send a beta and manage your feedback: Your comments are never mixed with other Google Play users. 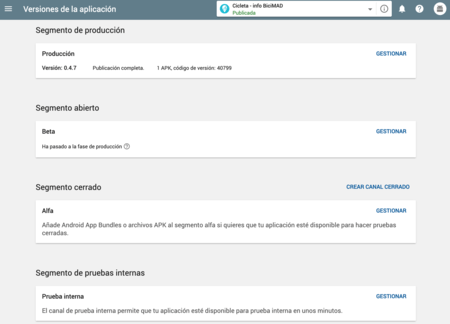 One of the most interesting features when publishing for a large number of users is the “Staggered deployment”, which allows a small percentage of users to be opened progressively in order to check that everything works well. And in case there is a problem, we can stop this update and solve it by uploading another version in a short time. This is one of the reasons why the new versions of some known apps do not reach all users at the same time, many of which we announce in Engadget Android are gradually appearing in waves, such as Twitter or Instagram with millions of users distributed all over the world.

Staggered deployment. Choosing the percentage of users that will receive each phase of the update 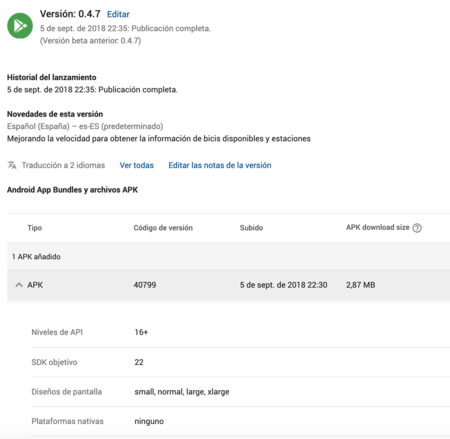 In each version we see the parameters that the APK defines as requirements:

And of course, for each version we can add the famous “news” text. Which honestly many users no longer pay attention due to automatic updates. Although, it is still a prominent element where Google motivates us to explain the news translated into each available language.

Automatic tests before launching the application

The immediacy of Google Play compared to the Apple Store allows us to make a new version of the app available to all users in just a couple of hours. Almost everything in the Google Play console is automated, there is no human intervention in terms of approval reviews. Although if we violate any of the publication policies they will contact us giving us a deadline to withdraw the application or just when we are going to send a new update it will be blocked. 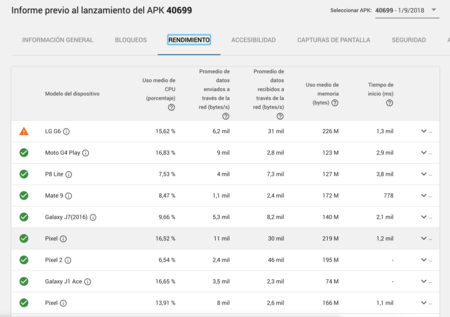 The previous report that analyzes our application before distributing it to all users. So it starts when uploading a new build to the beta channel. In about thirty minutes we will have a detailed report on possible vulnerabilities known security issues, performance or accessibility issues. The automatic tests are also executed by going through all the application flows through Firebase Test Lab, but we must configure them with the necessary data and include a script with the route we want it to perform.

When everything is correct we can distribute the new update through the main production channel. As I said, in just over an hour it will be available to all users.

Almost all of us have ever written a review of an application on Google Play, so this will help you see how those comments appear to developers.

In the Google Play console there is a section for view all comments from users. For some time now, the console has allowed comments to be grouped by similar topics, analyzing the problems or characteristics that users stand out the most. 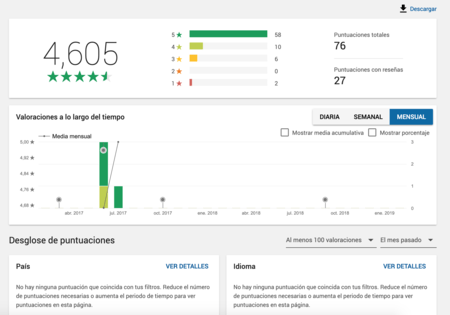 We can cross data to see which specific versions are failing the most and if it has been for something concrete. I already tell you that the comments sometimes do not even have anything to do with the app itself, but are complaints about the service or some functionality that users demand and, in a certain way, they hijack the stars until it is available.

For some time now, the developer has also been allowed to respond publicly to users. It is often used to solve problems and try, on the other hand, that this assessment can change. 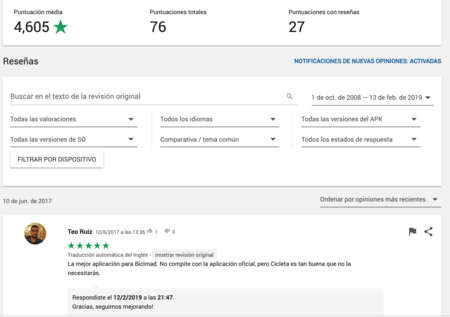 Much of the success of an app on Google Play depends on a good feedback, so it is one of the most visited sections to consult user problems and check the evolution of the app’s evaluation over time. All comments can be filtered by the version of the application, the number of stars, languages, keywords extracted from the comments or the versions of the Android operating system.

Google places a lot of emphasis on application performance. For this reason, it has been working on an experiment for some time in which, using data from users who have joined the Android Vitals program, offers information on the use of applications available on Google Play. With this we can see stability metrics, errors or bugs, use of the battery that our application consumes or the time it takes to render each of the screens to detect performance problems compared to other similar applications.

App Bundle has changed the way applications are distributed to make them more lightweight. The philosophy is that the user downloads only what he will need. That is, languages, graphic resources or native libraries adapted to your specific terminal architecture. This can save up to 40% of the size of the application. Within the developer console we can upload the application in parts and the Play Store itself is in charge of managing what each installation needs depending on the device and user.

Some tips to properly handle the Google Play console

So far this review on the main features of the Google Play Console where we have seen how an app is tested before deploying it to all users and the statistics that we can see for each version. As well as the feedback that reaches users or the staggered deployment, which is why not all updates are available at the same time.