The coronavirus pandemic that we are experiencing worldwide is having a negative impact in most sectors. However, a new report by Canalys shows that it has not had the same effects in the smart watch market, which has grown considerably in the first quarter 2020.

As expected, that growth has not been the same in all brands Not in all countries: the big beneficiaries have been Huawei and Samsung, while the Apple Watch has experienced a drop in the units shipped that does not prevent it from continuing to lead the ranking. Google’s WearOS and Fitbit operating system continue.

Huawei’s momentum is born in the local market 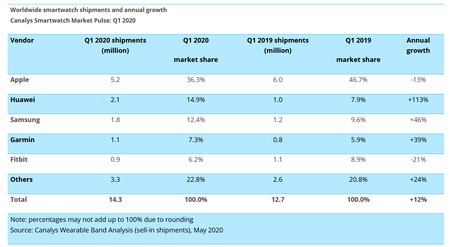 Canalys’ new report estimates that the smartwatch market as a whole it grew 12% in the first three months of the year. Surprisingly, this growth has not been driven by the Apple Watch, which although it continues to lead, has lost a considerable market share in the last year: the 4 million units shipped in the first quarter of 2020 represent 13% less than the year. past.

On the opposite side of the balance we have Samsung, Garmin and Huawei: the first two show solid year-on-year growth and have shipped hundreds of thousands more units in the first quarter of 2020 compared to the same period in 2019. Huawei, by its part has doubled its market share in this period thanks to the shipping of 2.1 million smart watches between January and March. 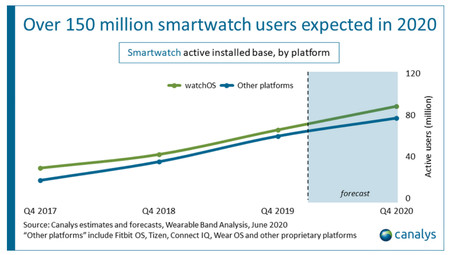 Looking at the data by country, we see that it is the first time that North America accounts for less than a third of global smartwatch shipments. Canalys analyst Vincent Thielke says that “the slow growth of Apple Watch in Europe and North America it’s because Apple customers turned their attention to AirPods as a ‘must-have’ accessory. ”

When analyzing Huawei data, it should be noted that the Chinese manufacturer included its smart watch with the purchase of the P40

Samsung and Garmin increased first quarter sales in these markets, while Apple received a boost thanks to its latest partnerships with operators in Southeast Asia and Latin America. Regarding Huawei, it should be noted that the Chinese manufacturer included its smart watch with the purchases of its P40.

In addition, as pointed out by Canalys, we must not lose sight of the growing competition from brands like Xiaomi, Oppo and Vivo in emerging markets. Regardless, smartwatch users worldwide are expected to total 150 million by the end of 2020. 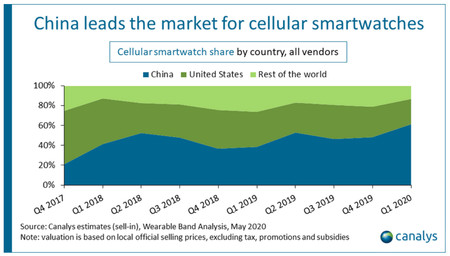 Lastly, it is worth noting the 66% growth in shipments of smart watches in China during the first quarter of 2020, a figure that is close to the data for North America. According to analyst Cynthia Chen, this is due to huge orders for LTE watches before Chinese New Year as part of the move towards national eSIM coverage, which has seen the shipment of 2.5 million cell smartwatches, “and sees China as” the key driver of smartwatch growth in 2020 as a result of its strongly recovered economy and of further momentum from local manufacturers, including Huawei, Xiaomi and newcomer Oppo. “