One of the experimental features of iOS 14 got a lot of attention when the first beta came out: double tapping on the back of the iPhone to perform actions. Google also introduced it in Android 11. And with an app we can have it on almost any mobile: run screenshots, turn off the screen and much more doing a ‘double tap’.

Android customization is endless, we already know: a mobile with this system can, almost literally, become a very different one. Even on an iPhone, always saving distances: it is possible to imitate the appearance, some apps and even mimic functions that are not on Android. As is the case of the ‘double tap’, an option that Apple introduced in tests with the beta of iOS 14. Do you want to try it? The truth is that it works quite well.

Execute actions on your mobile with a double tap from behind

Ahead of the phone is sensitive to touch, pressure, can capture an image, adjust the brightness of the screen after analyzing the ambient lighting and even performs actions with the voice. This is obvious since most sensors are aimed at the face of the mobile with which the user interacts, but it is also possible to turn the back of the phone into a sensitive area. Even if it lacks sensors: Accelerometers can pick up touch vibrations.

The application we are talking about is called Tap, Tap, at the moment it is in an alpha state of development and it still cannot be found on Google Play: you will have to access its installation from an APK file. And one last drawback: Tap, Tap is currently in English.

As expected from the application, once installed on the mobile phone (you need to give it accessibility permission) it records the taps on the back to react to the double tap. It is not necessary to exert much force since the app is sensitive enough: two taps and Google Assistant jumps, for example. Or other functions, like take a screenshot, activate the flashlight or launch an application: Tap, Tap is highly customizable. It even has Tasker compatibility. Not only that, Tap, Tap allows you to apply filters so that the double tap does not work in different situations, such as when the screen is off or during a call. It can also be customized. 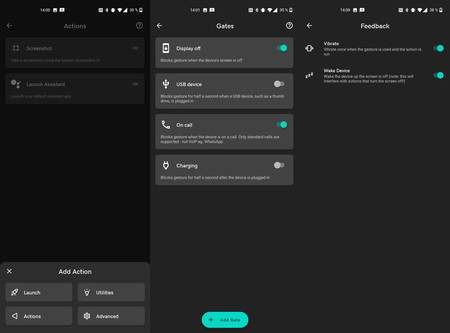 Although it is still in development, it is surprising how well it works: if you wanted to apply a universal gesture to your Android, you can already add it with Tap, Tap. It is in alpha state, remember: maybe on your phone it still doesn’t work as it should.

One of the best functions of iOS 14 on your Android: this app adds a double touch to the back of the mobile