One of the Achilles heels of Android, in addition to updates, is the audio latency, which is why there are hardly any real-time audio applications for professionals, but fortunately this began to change a few years ago.

In the last four years Google took very seriously in reduce audio latency in the Android ecosystem, and today the company analyzes how much this essential feature for audio professionals has improved. 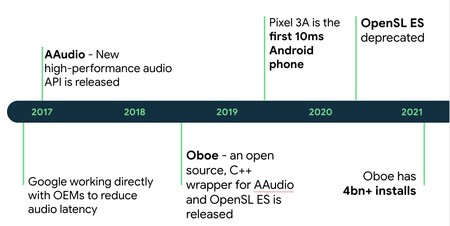 It all started in 2017 with Android 8.0 when Google added the high-performance API AAudio after spending several months working directly with OEM manufacturers. In 2018 he launched Oboe, a C ++ wrapper that provides an API very similar to AAudio that calls AAudio when it is available or OpenSL ES if it is not. In 2019 the Pixel 3a becomes the first mobile to offer 10 ms audio latency (maximum latency that the human ear does not detect). In 2021 the Oboe library exceeds 4,000 million downloads. 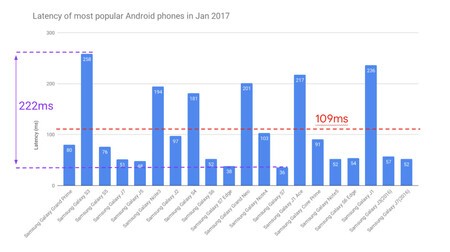 In 2017, the audio latency was 109 ms on average, but in that year we could find mobiles with 222 ms and mobiles with 36 ms of latency. Four years later, in 2021 the average latency is 28 ms on the most popular mobile devices and that none are high-end, so it is to be expected that the high-end is offering lower latencies. 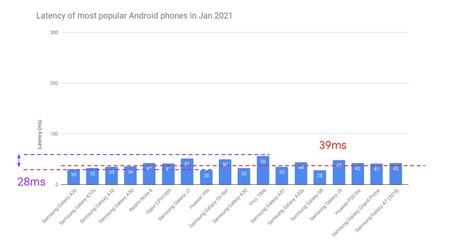 All these figures are from the round trip audio latency, and this involves audio input, audio processing, and audio output. If there is no audio input and the sound events only depend on touching the screen then it would be necessary to subtract the 5 ms of the audio input latency and add the 20 ms of average of the touch screen, 15 ms more of delay.

Google’s work to improve audio latency is still far from finished. Despite significant reductions a peak latency of 20 ms is still required for professional Android audio applications, being the 10 ms the long-term goal.