One of the novelties that Android 12 brings under its arm is the support for a new image compression format, AVIF, one with which Google aspires to be able to replace the eternal JPGs both in its own operating system and in Chrome OS, and even in Chrome, its browser for different platforms.

We have already seen a similar change to video on Android arrive with the premiere of the HEIF format with Android 11, and now it is the turn of the photographic section. In fact, the change makes a lot of sense, since HEIF and AV1 (the more technical name of the AVIF format) share the same standard, ISO-23000-12. And in the same way that HEIF in video offers the same quality in a much smaller size, AVIF does the same for images.

What exactly is the AVIF format 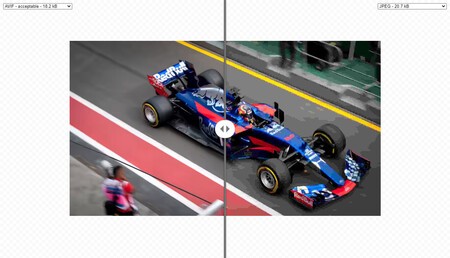 The name responds to a series of acronyms whose meaning is “AV1 Image File Format”, simplifying the last F so as not to be redundant. As with the HEIF format in video, the AVIF format is a container that allows you to store both static images and animations inside, so GIFs also have a place in the new format.

AV1, like HEIF, allows you to store the same information as a WebP image but in 50% of its space. In other words, images in AVIF format take up half the space of a WebP image, which in turn already represents a significant saving compared to JPG. Summing it up a lot, an AVIF would occupy about a third of the weight of a JPG, with the addition that it supports some advanced features that are not supported in current JPGs.

For example, in the AVIF format, color depths up to 12 bits, Native HDR, monochrome formats and lossless compression, which is known as loseless by its Anglo-Saxon name. In addition, AVIF supports any color space of those known so far in addition to chroma subsamples (4: 2: 0, 4: 2: 2 and 4: 4: 4) and even the insertion of the film grain so classic of the cinema.

The Webp format has been used for some time on the Internet by a Google that seeks to reduce not only the storage on its servers but also the traffic due to the increasingly advanced use that we make of the network of networks. This arrival of the AVIF format to Android will also mean that the system will have more available storage, while it will cost less to move those images, with the corresponding memory and energy saving.

Today, there is no better image compression than the AVIF format offers, even surpassing, as we said before, the WebP that came to improve JPG, PNG or GIF. And this support now reaches Android 12 natively, according to what was seen in the previous version for developers of the system that is already available and can be installed.