We have already spoken on several occasions about Vivaldi, a web browser that made the leap to mobile phones just a year ago, directly from version 2.7 for desktop systems, and that has been making its way through the tangle of smartphone browsers that are available in the Android ecosystem.

Vivaldi brought to mobiles some of the features that made it very strong on the desktop, such as its customization capabilities or its different security and privacy measures, and precisely the latter improve in their new version, 3.2., in addition to other changes related to the design of the app. 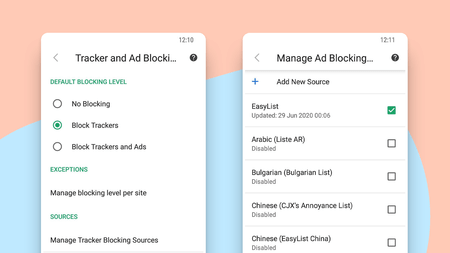 As we say, Vivaldi introduces changes in its version 3.2 and one of them is a substantial improvement in its integrated blocker, one in charge of making the navigation clean, without intrusive ads and without cookies of trackers of any kind. The new Vivaldi 3.2 now allows enable more block lists while we can add our own custom lists.


Just like until now we could add public advertising and trackers block lists, Vivaldi 3.2 allows us to import our own lists to improve our user experience. To do this we will only have to go to Privacy> Tracker & Ad Blocking> Manage Tracker Blocking Sources / Ad Blocking Sources. As simple as this.

But in addition to this improvement in security and privacy, Vivaldi 3.2 introduces design changes at its launch. The lower function bar, already added to the browser in its previous major update, now receives improvements and more functionalities. Now we have a tab switcher in the same place to manage public and private tabs, and even the most recent ones.

The app introduces in its version 3.2 other minor changes, such as renaming its bottom bar, which goes from Tab Strip to Tab Bar (without effect in the Spanish version), but the bulk of the changes lies in the customization capacity of its internal blocker. Vivaldi is still a completely free web browser and we leave you the download link right at the end of this text.

Vivaldi browser 3.2 for Android improves ad and tracker blocker and makes changes to its design