Vivo reveals its plans to upgrade to the Android 11 beta

With the beginning of the year, there are several brands that are drawing their roadmap to update to Android 11. From China, OPPO announced when their betas and stable versions of ColorOS would arrive and now It is Vivo that follows, marking the dates for its beta on the calendar.

The Chinese company has announced when Funtouch OS based on Android 11 will arrive, a beta that will include a long period, so we can expect the stable version on some models after mid-2021.

FuntouchOS will slowly reach the Vivo 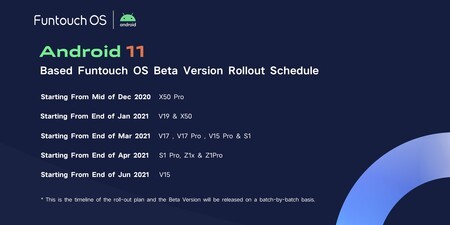 From the Twitter account of Funtouch OS India they have revealed the dates on which the beta of Funtouch OS is coming, based on Android 11. They indicate that the beginning of distribution was in the month of December, debuting on the Realme X50 Pro.

The Funtouch OS beta will go in batches: it started in December and the latest devices will receive it at the end of June

After this device there will be different batches, which range from this month of January to the end of June 2021. These dates refer to the beginning of the beta periods, so the stable versions will arrive later.

As we can see in the list, two of its most popular global mobiles, the Vivo V19 and the Vivo X50, will begin updating to the Android 11 beta this January, so the stable version shouldn’t take that long.

Vivo reveals its plans to upgrade to the Android 11 beta