What are Google Play system updates and why do they download by themselves to your mobile?

You have system update notifications via Google Play and not knowing why? These types of notices are behind vital new software for the phone, they reach all Android 10 and higher with Google applications and are downloaded automatically.

Google introduced a type of updates with Android 10, versions of software that don’t come through the usual system updates, but for the Play Store. It is called ‘Project Mainline‘, system modules that bypass manufacturers to more quickly reach owners of a phone with Android 10 and above. Surely you have ever seen that notification, the one that warns of a ‘Google Play system update’. It is normal and you can restart the phone to install it.

All Google Play system updates have automatic download enabled. This implies that you do not have to do anything to download them to your mobile since, once the system detects them, proceed to download them by itself. In principle, downloads are made when the smartphone is connected to Wi-Fi networks and they do not have much weight, so they do not consume too much data.

These Google Play system updates may include various improvements for the system, especially for the base software of the device (not for the software layer that the manufacturer integrates as it updates your device using the usual OTAs). They are independent of the updates of the Play Store and also of the Google security patches– Installing a ‘Google Play System Update’ does not improve the phone’s security patch and does not upgrade the Android version.

Google automatically downloads these system updates because it considers them essential for the stability of the system. However, and as always the user’s approval will be required, It is essential to restart the device for the update to installand; or let it install automatically with automatic reboot, the notification always offers both possibilities.

It does not matter the brand of the phone or the model: if you have an Android above version 10, and it came with Google apps and services pre-installed, sooner or later you will get a ‘Google Play system update’. Sometimes they are more frequent and sometimes less, everything will depend on the smartphone.

How to check for updates manually 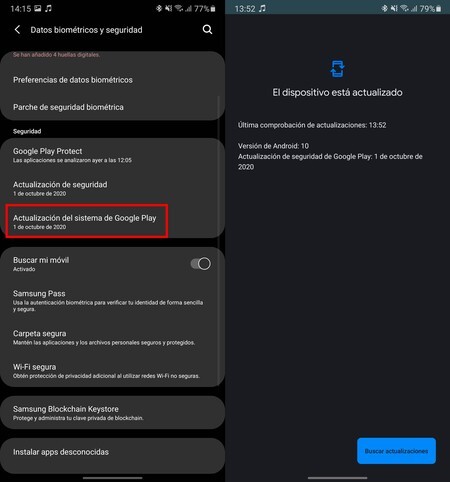 Google Play allows solving stability and security problems with system updates, as we have already seen. These updates do not pose a risk to your phone: you can install them without fear once you have them downloaded to your device (restarted from notification). Their verification is automatic, but you always have the possibility to search for them on your own to ensure that your smartphone is up to date.

To find out if you have pending system updates through Google Play you have to do the following:

What are Google Play system updates and why do they download by themselves to your mobile?