The messaging client WhatsApp it does not stop receiving news through its Beta version, such as its new packages of animated stickers or being able to change the playback speed of the notes, but its version in development also gives us some of its next news.

For more than a year we have known that WhatsApp prepares the encrypted backups to give more protection to the user, but in all this time this feature is still under development, so we have to discover how it will work with the leaks of its own source code.

The latest update of WhatsApp Beta allows us to know more details about the configuration of end-to-end encrypted backup. The WABetaInfo filter has managed to activate some screens to show a preview.

Your configuration screen will inform us that activating the backup with the end-to-end encryption We will keep our message history and multimedia files on Google Drive safe from unauthorized access to our account. It will also show the maximum available or contracted storage in Google Drive. 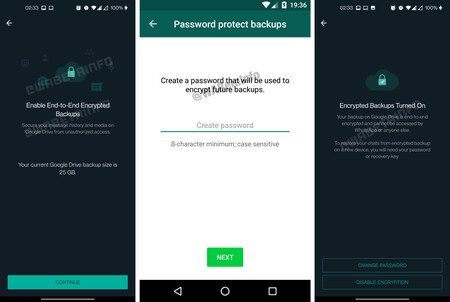 In the next window we will have to create a password of a minimum of eight characters, being case sensitive. Once the password has been set, the next screen informs us that the encrypted backup is activated, offering the options to change password or disabled encryption. It seems that it will also allow to create a recovery key.

Currently WhatsApp is only encrypting messages, calls and video calls, but not their backup. Anyone who can access our Google Drive account could access all the messages in our backup.

As soon as WhatsApp activates the encrypted backup already using a password, we will keep our data more protected against possible attacks or oversights. Of course, if we do not remember the password we will not be able to recover the backup. WhatsApp is expected to launch this novelty before the end of the year.