After “why the chicken crossed the road”, the second great question of humanity is why your mobile does not let you download applications or take photos if memory card still has available space, an enigma that has frustrated many Android users for years.

It doesn’t seem to make any sense, and yet there is a logical explanation so that the memory of your Android mobile will resist updating or downloading new applications or taking photos. Here we will see why it happens, and what you can do about it.

Not all storage is the same

To understand why this happens, we first have to understand the concept of data partitions. A partition is nothing more than a virtual partition of a physical disk drive. The storage of an Android mobile is located divided into multiple partitions.

The number and type of partitions can vary from one mobile to another (for example, Huawei started using the EROFS read-only file system in the latest versions of EMUI), but something that most mobile phones agree on is in three partitions: system, data and cache. You can check the partitions of your mobile with applications like DiskInfo. 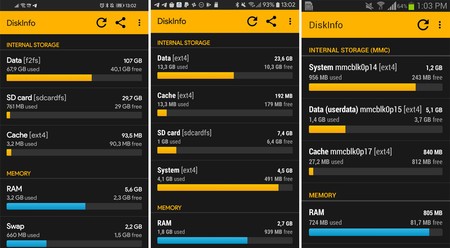 There are actually a lot of additional partitions, but those are the main ones. In the system partition is the operating system and pre-installed applications, in the cache the application cache and on the data partition, the rest, including everything that is saved in the internal memory of the phone.

This is the reason why mobiles have a storage available to users considerably less than total (In the previous screenshots, 107/128 GB, 23.6 / 32 GB and 5.1 / 8 GB respectively). It is also the reason why the mobile does not stop giving you space problems despite the fact that the memory card is almost empty.

The only thing that is saved on the memory card directly – and depends on the configuration of the camera application – are the photos and videos. The problem is that these photos and videos generate thumbnails and cache in the internal memory, so that, in the long run, even though the photos are saved on the memory card, they also have an impact on the internal memory. . 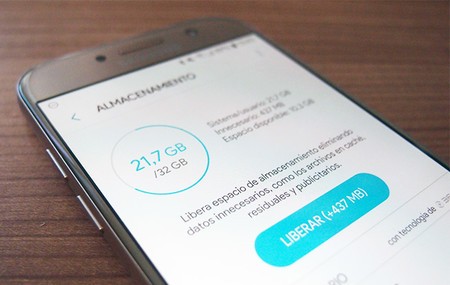 What can you do if you don’t have space 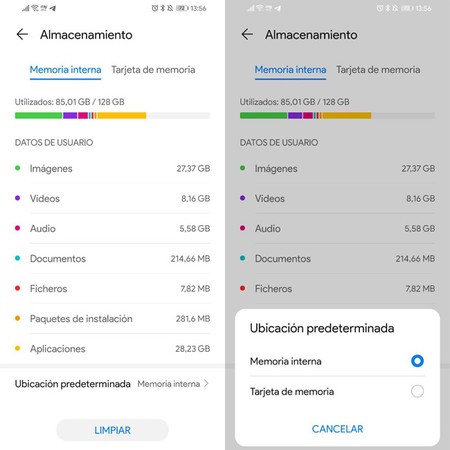 EMUI lets you choose the default storage location, although this is not normal

If you have a memory card full of space but the internal memory is full, your mobile will not stop giving you errors every time you try to do anything. Luckily, there are a number of strategies you can carry out: