The Xiaomi Mi Box S is one of the most popular TV devices, and it’s no wonder: for its price the player offers an excellent service. Due to the success, Xiaomi recently launched the Xiaomi Mi Stick TV, although it is in its native country where the brand has a greater number of similar players. In fact, it is about to present a new one: the Xiaomi Mi 4S Pro. And it points ways. 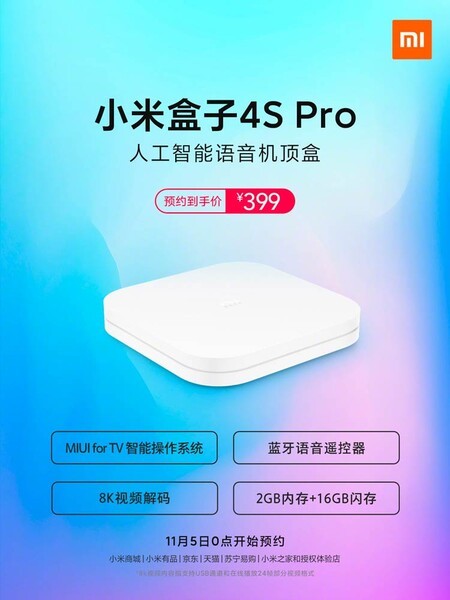 The new Mi Box is official since Xiaomi itself has revealed it on the Weibo social network even though it has not yet been definitively launched: it will do so tomorrow, November 5. The Xiaomi Mi Box 4S Pro is an evolution of the Xiaomi Mi Box 4S where the brand takes the opportunity to raise the resolution while adapting the technical characteristics of the device to the needs of this new image size. Of course, it maintains the 2 GB of RAM and, as expected, also the same processor (the Amlogic S905L).

As we said, Xiaomi has anticipated the new player on Weibo in order to reveal all the features tomorrow and start the pre-sale period. The Xiaomi Mi Box 4S Pro will play content in 8K, it will have 2 GB of RAM, will raise your storage to 16GB, offer HDMI 2.1 output, it will come equipped with the company’s system for television devices (MIUI for TV), it will include a remote control connected by Bluetooth and hopefully it will not do without dual band WiFi or Xiaomi’s voice assistant.

The Xiaomi Mi 4S Pro will go on pre-sale from November 5 at 00:00 China time. Its price will be 399 yuan, about 51 euros to change. As usual, we do not know if he will finally leave China, he will surely stay in that country.