Google continues the development schedule for the next major update to its mobile operating system by launching a new version of Android 11 Beta.

As usual, Google only reports news that affects developers, and in Android 11 Beta 2 the main news is that they reach a important milestone in the development of this new version, since Android 11 enters the milestone called “Platform Stability”. This means that from this version we are already facing the stability of the platform, with the APIs and final behaviors, so there will be no changes that may affect the applications. Therefore, the applications that from now on become compatible with Android 11 Beta 2 will already be compatible with the final version of Android 11.

Now developers will have two months from today to make their applications compatible with Android 11 without waiting for last-minute changes. The next beta version will be released in August, and the final version in September at the latest. A Google leak has revealed[September 8 as possible release date for Android 11
.

Android 11 Beta 2 for the Pixels 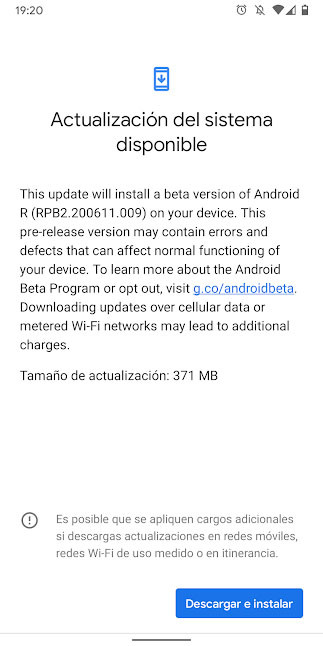 The Google Pixels are the first models to receive Android 11 Beta 2. If you already had Android 11 Beta installed you will only have to go to Settings> System> Advanced> System update to actualize. If you have a Pixel 2, Pixel 3, Pixel 3a or Pixel 4 And you don’t have the Android 11 beta yet, you can receive it via OTA by registering here.

Android 11 Beta 2 is here: these are its news