Android 12 is here. The stable version of the big update to Google’s mobile operating system has already reached the Pixels. After five beta versions Google has finally released the final version, but that does not mean that it is the end of Android 12 Beta.

Google has announced that the Android 12 Beta program continues, which company is going to follow testing the next updates on their Pixels, throwing a important warning to current Pixel users who signed up for Android 12 Beta months ago.

Android 12 Beta will continue in December

If you have a Google Pixel, you have updated to Android 12 from Android 12 Beta 5, you will not have to do anything to continue receiving the next features, bug fixes, and stability and performance improvements before anyone else. Google will continue to test the next updates in Android 12 Beta before releasing the update to all users.

On the other hand, if you no longer want to continue testing previews of upcoming updates and want to keep the stable versions of Android 12 you will have to exit the Android 12 Beta program before December 1.

This means that from December Google will launch the beta of the next update, surely the winter ‘Feature Drop’, in which, as usual, new exclusive functions will arrive on the Google Pixel. Rumors suggest that it could be Android 12.1.

How to stop participating in Android 12 Beta 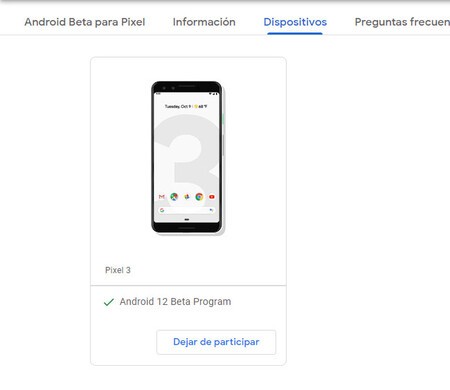 As I said before, if you have a Google Pixel that during these months has been testing Android 12 Beta and you want to plant yourself with stable Android 12 you have to go google.com/android/beta, go to the section ‘Devices suitable for the program’ and in the tab of your Pixel click on ‘Stop participating’.