The installation format App bundle (APKM) dynamically generates the APK optimized for our device, with the specific components for its processor, screen and language instead of downloading a generic APK with all the components of all possible configurations. All this means that the application takes up much less space on our device.

Oversized games could not enjoy all the advantages of App Bundle, as dynamic delivery was not compatible with APK expansion files called OBB, which suddenly downloaded all the resources without adapting to the type of device, with which many developers bet on using their own content distribution network, so that the game once installed downloaded the additional resources, but this was not totally optimal either and had a maintenance cost of the servers by the developers. To avoid all these problems Google launches Play Asset Delivery.

Google describes Play Asset Delivery as a new publication format that offers a dynamic delivery of the right game assets for the right devices at the right time and at no additional cost. 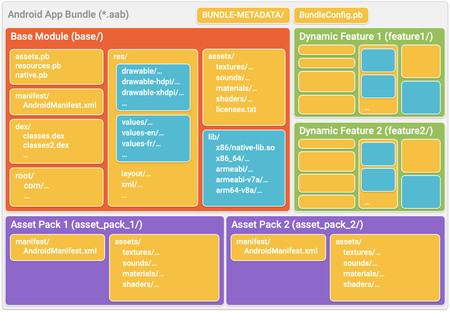 Play Asset Delivery allows developers to decide when all additional game resources are downloaded, whether during the first installation, when the game is started for the first time by first downloading the basic components to be able to play and then the rest of the resources, or to leave downloading on demand, as we progress through the game.

With this format, in addition to downloading the game for the processor, screen and language, it will also download the optimal game resources for our device. Coming soon will also package textures in multiple compression formats and App Bundle will download the most optimal one to our device.